Why does Samsung company name means "Three stars" and not "Three castle"?

I went to Google Translate and pasted the two words:
삼 = three
성 = castle (and other options, none of them being star)


If I paste them together, 삼성, it just says Samsung.

So, why does Samsung company name means "Three stars" and not "Three castles"?

If you search for "ant" in a small English dictionary, you will only find about the insect. But "Antarctica" is not ant's Arctic, it's "anti-Arctica", i.e., something that's the opposite side of the Arctic. In fact "ant(i)-" is a very common English prefix, even though it's normally not used as an word by itself.

Many Korean words are made of Hanja (Chinese characters) - 星(별 성) is one of them, and a very common one. You won't find the letter used by itself, but it shows up in tons of words whose meaning are related to stars.

Edit: Also, if you're wondering "but how do we know the 성 in 삼성 is 'star' and not some other hanja?" That's a fair question - and the answer is that we know because 삼성 literally used to write its name as 三星, with its brand logo prominently showing three stars. Search "samsung old logo" in Google, for example.

Here's a photo of their old standing building, prominently displaying their original name: 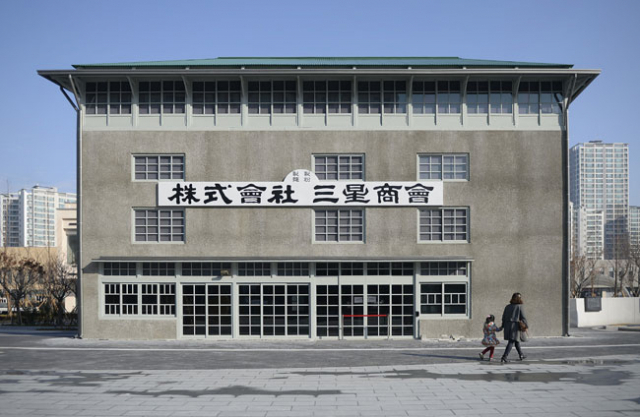 별 성 is in the format of an 音訓 (음훈) dictionary gloss for the character 「星」, where

See also What is 훈음 in a layman's words?.

Not the answer you're looking for? Browse other questions tagged translation meaning korean-to-english or ask your own question.

3
Differences between 외, 바깥, 밭 and difference between 안 and 내
1
Does "무료는 포함되지 않음" means “Ad-free not included”
0
Why does the North Korean guide in this video not seem to understand written Korean letters?
0
Why is it 쓰는, 읊은 in #1 and #2 not 쓴 , 읊는 respectively?