I've had the idea for a while that translating English-language memes to send to my Korean mother might be fun. I'd enjoy learning about the nuances of Korean language and she'd at least know I'm thinking of her, even if the memes don't hit right.

The meme that originally gave me this idea is this one: 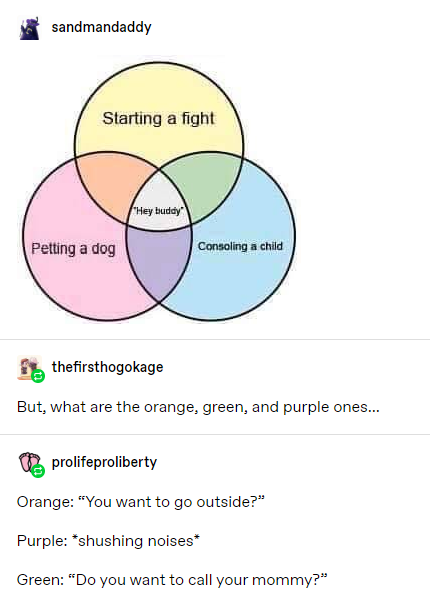 I was born in the US and only learned rudimentary Korean as a child in the 90s (speaking to my mom and reading some books), but here's what I've got so far.

Please do correct my spelling so I learn, and feel free suggest alternative translations and conjugations that would work better.

I also want this to be fun and welcome content in this SE, so I'll see how this one goes, listen to any feedback, and spread out future requests.

center : in korean, 야 인마 usually used informal situation. and it usually used with same sexual. like dude or mate. In this situation, speaker want to start the sentence. so i think 저기...... is more suitable,

orange : formal ways, youre translate is work. but this is the meme so i think "일단 나가서 이야기하자"is more humorous. It's a typical cliche when you're having an argument in korea. and its superficial meaning is go to the outside. so it`s also reasonable translate.

purple : i think "귺귽긂긄긆귻귾긃긅~~!"is work. in this situation, child and animal is so loud. so you can translate any language except for an understandable language.

green : i think "어머니는 어디 가셨니?"is work. You can use these words to a child who is lost. but in fighting situation, it is used to ridicule Mama Boys. And it`s polite to speak, so it feels more sarcastic.

Not the answer you're looking for? Browse other questions tagged joke or ask your own question.