(This is a question about handwritten Korean, I don't have enough reputation to create a new tag for handwriting.)

My Korean grandfather's notebook contains a chronology of the places he went while migrating to France in 1920-1921. This is written in a mix of hangeul and hanja, and both are hard to read for me (*)

Among the parts in hangeul, I see things that don't look like standard combinations. Here is a portion apparently corresponding to the part where he left Korea, went to Shanghai by train, then to Marseilles by boat: 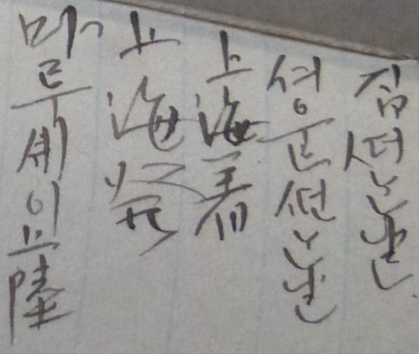 This is written from top to bottom, right to left (I will refer to theses columns by numbers 1 to 5 from right to left). These are likely place names. Below each one of these are a date in hanja (not shown). The right-most is associated to a date corresponding to his arrival in Marseilles.

Here is what I guess for each column:

On columns 1 and 2, I guess these may actually not be place names, because they end in what looks like 날, and this can mean "day". So it could be something like "the day when I left/arrived at XX". (a) and (b) seem to have a ㅅ either lonely or in the beginning of a syllable, combined with the next ㄷ. I'm not sure about the ㅁ in 짐 at the beginning of column 1.

On columns 3 and 4, (c) is likely Shanghai. The second hanja is difficult to read, but Shanghai is likely because that's where he spent some time before taking a boat to Marseilles. I completely fail to read the following hanja (and I'm not even sure they are hanja: could they be hangeul?).

On column 5, I suppose the word in hangeul corresponds to a phonetic notation for "Marseilles": "marusyeiyo", but (d) is strange: I either see a 이 followed by a 요 without its empty consonant placeholder, or both combined around the same placeholder.

I'm not sure about (e), but one possible guess given what I found in the "Pleco" smartphone app: This character can mean shore, land, continent. These meanings would match the idea of an arrival by boat to the continent. So this could be "Landing in Marseilles".

So, my questions are the following:

(*) I was raised in French and only slowly started to study Korean (and Chinese) about one year ago. My grandfather died in the 1980's without ever having taught Korean to his children (whenever they asked, he would tell them that they should study Chinese first). We got aware of this notebook only after his death. Our interest in these things was revived with the 100th anniversary of 삼일 운동 last year.

(**) My grandfather was from the region of Hamhung, in what is now the east coast of North Korea. I read in Wikipedia that they have a quite distinct dialect there. I have no idea how dialectal my grandfather's Korean actually was. He was from a poor countryside family, but went to school where he learned some classical Chinese, then some Japanese (after the 1910 annexion).

I'm not an expert on old Korean, but some of them look recognizable.

I think, there were no standard Hanguel grammar at that time. Not even the official language of the nation. So people freely(?) used several combinations of Hanguel alphabets to record their sounds.

(**) about your second note: It looks like standard Hanguel (not dialect) and pretty normal (even academic) writing to me.

I can't decipher all of it, but the ㅅㄷ combination is an old way of writing the ㄸ character; so it would say "떠난 날". (I think it's 떠난 날, but with 아래 아, a dot under the consonant, an old vowel which became ㅏ)

I wonder if 짐 is actually 집? It looks like a handwritten style ㅁ, but it's a bit different - so 집 떠난 날 would be the day he left his home.

The original Hangul, called 훈민정음Hun-min-jung-eum, had more diverse combinations and few more characters compared to current usage, such as ㅴ, ㆋ, ㅿ, ㆍ,ㆆ. We believe that these allowed Hangul to express sounds more precisely than we can do with current Hangul. However, this also caused Hangul to be more difficult to learn, and even the linguistics experts had to debate how to pronounce such combinations when they tried to formalize the rules in early-mid 20th century. They ended up banning such combinations and characters, as well as adding few new combinations that are currently in use.

14
Hangul -- printed vs handwritten
14
How does 15th Century Hangul writing/type differ from modern Hangul?
3
What do the characters I've found on this old gun mean?
4
What is written in that big bracket?
0
Is Hongik Ingan Eumdok 음독 or Hundok 훈독?
0
Why are 댜 뱌 챠 탸 퍄 햐 됴 툐 not used?
1
Beginner learner of Hangul seeking clarifications
1
Why was 不 (etymon of 아) pronounced *An in Old Korean?
2
Silver Mark Translation Help