Why 방금(方今) means just now in Korean while "方今" means nowadays in Chinese?

방금 has its hanja "方今", which doesn't means "just now" but nowadays in neither ancient Chinese nor modern Chinese.

The standard dictionary has the three definitions of 방금(方今):

At present, however, 방금 mostly refers to the first one, as you can see from what people say. A dictionary says that 方 of 方今 means 바야흐로, but 바야흐로 does not explain the how 方今 became to mean "only a short time ago."

No answers would be absolutely correct to your question. In the comment section above, I left a few links for you to read some people's opinions (For the late 정재도's, I found this post and this document as well). Among them, I would support the idea that 방금 has been a native word and add that 方今 was semantically the same in both languages. I suppose that lexicographers merged 방금 and 方今 into one word while compiling dictionaries because the sound of 方今 is the same as 방금 and 今 means now. This seems to be the reason that Korean 방금 and Chinese 方今 are different in meaning.

In Korea, 方今 meant "at the moment" or "at present" as shown in the following:

Someone may claim that the meaning of 方今 has expanded in the Korean language, but is it true?

A Korean writer 이광수 wrote some stories using both Hangul and Hanja characters in the way shown below as an image. In "어린 벗에게" (1917) (the full text here), which is one of his short stories, he used 방금 not 方今 to say "only a short time ago". This suggests that 방금 is actually not Chinese because he used Hanja characters only for all of the Sino-Korean words in the story. Now, one may ask: "Did he forget to use 方今 there?" My answer would be: "I do not think so because there was an editor." 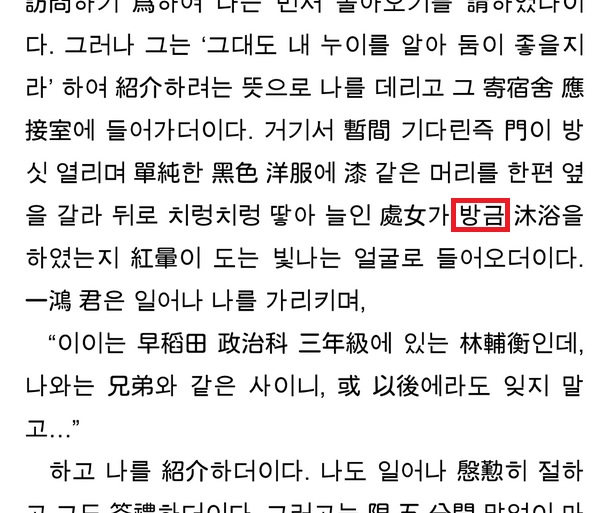 On a side note, he used 只今 ("right now") and 至今 ("up to this day" or "now") in another story titled "尹光浩" (1918), which clearly shows that he used Hanja characters thoroughly, even for temporal adverbs, at least in these two stories. Although 정재도 claimed in 2005 that 지금 is irrelevant to Chinese or Japanese 只今, it is true that 이광수 had used 只今:

Korean writers at that time used either Hangul or Hanja characters (or both) where Sino-Korean words were put, as you can see in the following example (old news articles here):

In general, however, the meaning of 方今 and its sound, 방금, in news articles remained "at present" until about 1970; since 1980 or so, the meaning of 방금 (There is no more 方今) has been "only a short time ago" not "at present." Although 방금 전 (meaning "only a short time ago") is used even in 2020, I strongly believe that it is a pleonasm because 방금 후 has never been used in news articles. Thus, I would claim that Chinese 方今 is actually obsolete in South Korea.

To make my opinion more convincing, I may have to find more examples. Please correct the errors if there are any.

6
Dropping of initial ㄹ and ㄴ before /j/ and /i/ in hanja
8
Why do product labels often have emphasized 한자?
5
Why are Hanja described with -ㄹ/을?
1
Meaning of 梛 (나무 이름 나)
0
Is the use of Hanja in Korean associated with Traditional (rather than simplified) Chinese characters?
5
Does the character 韓(한) refer both to Korea, and to a geographically distinct Chinese 'Han'?
8
Unusual hangeul syllables in 1920's handwritten Korean?
0
Why are 댜 뱌 챠 탸 퍄 햐 됴 툐 not used?
1
What books or reliable websites list commonly used Sino-Korean vocabulary in 2021?
1
How does "주간" translate to "daytime?"