Why does the North Korean guide in this video not seem to understand written Korean letters?

Ever since I first saw this seven-and-a-half-minute video five years ago, I've been puzzled over a certain moment, at 2:30: https://www.youtube.com/watch?v=9BNN4tlBy-g&t=150

The guide appears to have never seen the restaurant before, or its sign, so she tries to read it and apparently struggles to do so. There is also a cut in the video, as if it took her a long moment. Well, maybe she just doesn't know which English words to translate it into, but it somehow seems like she is having trouble reading it as Korean, rather than the translation part. Maybe I'm wrong, but I just can't shake that feeling every time I watch the video.

She seems to know English quite well and, while a bit dizzy when trying to open the doors, appears very intelligent. That's why I'm so confused. Surely she must be able to read her own language?

When they are still in the car, in the beginning of the video, before they get to the restaurant, they even make a joke about wondering if she really is Korean, but that doesn't explain much to me. It just makes me even more confused about the whole thing.

She is clearly heard speaking Korean multiple times, so she must know it?

The part she's having trouble reading isn't the clear hangeul letter (which reads "이딸리아 특산물 식당" or 이딸리아 축산물 식당" - it's a bit too unclear to read); it's this stylized logo:

This logo does have hangeul as well, 륭성 I think; but as it's a stylized neon sign, it is quite difficult to read.

I agree with @gaeguri...this is hard to read. In fact, that splotch of neon sign captured in the @gaeguri post is (to me) completely illegible.

Here is a copy screenshot of the entire sign:

Unless you really squint your eyes and blow up the letters a little, it's pretty hard to read. It appears to say:

Besides that blob of what is potentially a chinese character (and the poor color contrast here), there are several other oddities that help prevent one's brain from recognizing the characters.

if perhaps that inflection makes ㄷ into ㅌ (someone help me here...is that what they mean to do?) - that is an archaic construct that a modern brain won't be as familiar with. Also...since ㅈ is inflected with such a mark to make a ㅊ ...then seeing that little dot might make one's brain think it's a ㅊ not a ㄷ (or ㅌ

in fact, @gaeguri reads it as a ㅊ...but i'm going with ㅌ since it results in something that might mean "Italian Specialties" 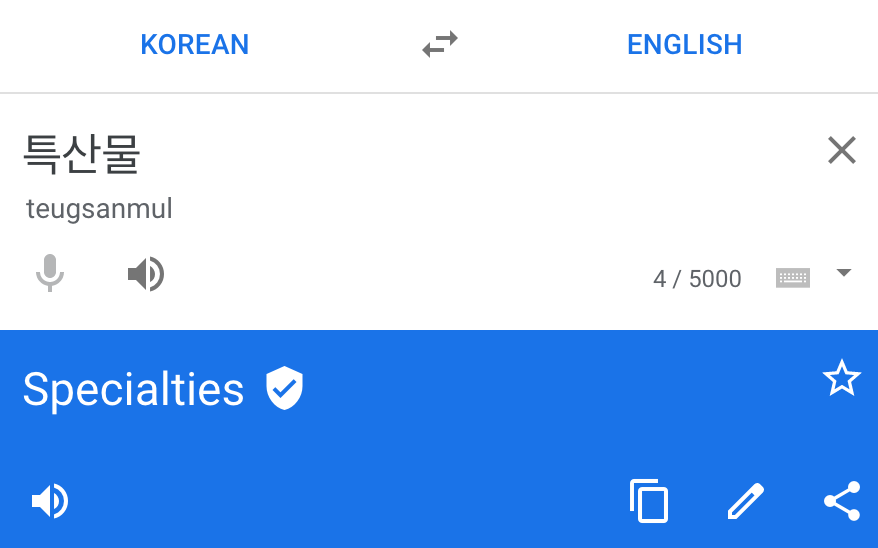 Not the answer you're looking for? Browse other questions tagged translation spoken-korean korean-to-english north-korean written or ask your own question.

27
What, if any, are the primary differences between Korean as spoken in the North and that spoken in the South?
11
Why is "려권" North Korean for "passport?"
6
DPRK proclamations are written in English using very nuanced (flowery) adjectives. Is this a regular part of Korean speech?
2
Is there a name for this style of text, with Hanja written alongside the Hangul?
4
"더러" grammar in 알더러 새가 되라는 말처럼 어려울 수 있다 (translation)
3
Is the Korean on this van referring to a church?
3
Should I pronounce Korean names with proper pronunciation while speaking English?
1
What does this North Korean woman mean by joking about "ear wax" when they are about to eat?
1
Why are Korean females so strict about pronunciation, grammar and language is general?
6
Why does Samsung company name means "Three stars" and not "Three castle"?