How can I understand the three extremely similar sounds, like 기, 키, and 끼?

I read the IPA description but honestly I don't understand the difference between them even after having heard so many times. The aspirated one seems a bit different, but only a little bit different from the others and are still unbelievably difficult to distinguish, in my opinion.

So what is the difference between them in pronouncing, and how can I hear them apart better?

pronunciation listening
Share
Improve this question
edited May 20 '19 at 22:41

I feel the same as you - I don't think the difference between these in real life is as dramatic as you might think from reading about them in a textbook.

The way I think of it is:

끼 isn't pronounced very differently to 기 in terms of the shape of the mouth. From what I've seen, the ㄲ is emphasised in the following ways:

In a way, yes they do. I think the thing to do is... not to worry too much about it! In English, the difference between "Oh, cheese!" and "Aw, Jeez!" might be very subtle. And yet they are different words, with different spellings and pronunciations. We can work out the words from context, and as long as we know the spellings of the words, we don't need to identify every sound accurately.

However, thinking of them all as 'ki' (or the equivalent in your language) probably isn't helpful. Maybe try to 'think in Korean' as much as you can, bearing in mind the distinct consonants, rather than their approximations in other languages.

Practicing "minimal pairs" will help you distinguish between similar sounds.

The feedback step is very important. It might help if you use sample sounds where the differences are really exaggerated and clear at first, then slowly step up the difficulty.

Japanese adults (who have similar trouble distinguishing between English 'L' and 'R') went from 50% to 80% accuracy with an hour of practice.

In three 20-minute sessions of this type of practice, participants permanently acquired the ability to hear Rs and Ls, and they could do it in any context.

The Key to Learning Pronunciation has much more detail about this method, including the scientific research behind it. You can create your own minimal pair flashcards, or Fluent-Forever has pre-made flash cards:

How about trying to sense the degrees of aspiration?

The consonants, ㄱ, ㄲ, and ㅋ, are voiceless, although ㄱ can be voiced between a voiced consonant and a vowel or between vowels. It would be good to remember that there are only four voiced consonants in Korean: ㄴ, ㄹ, ㅁ, and ㅇ (ㅇ at the end of a syllable).

The difference between the sounds of 기, 키, and 끼 emerges from the amount of exhaling to pronounce ㄱ, ㅋ, and ㄲ. We can readily observe it using Praat. The following figure illustrates how differently they are pronounced. 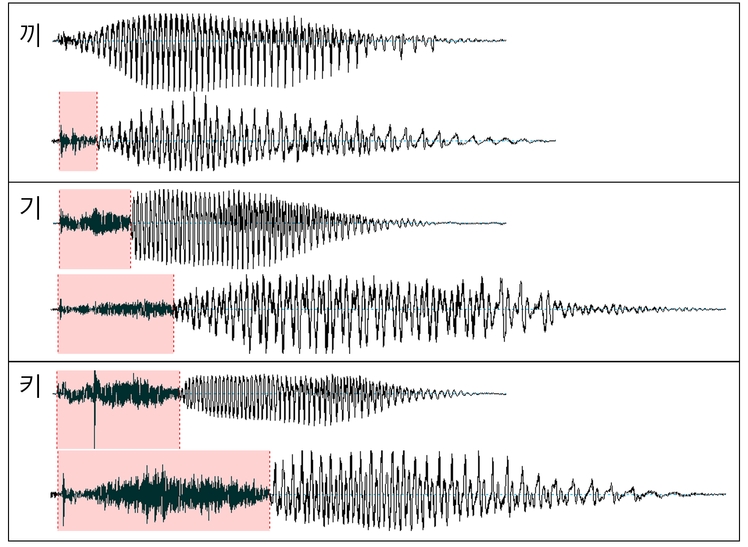 From the top, it shows the visualization of a female speaker's 끼, a male speaker's 끼, female 기, male 기, female 키, and male 키. This indicates that there is an obvious difference between them: ㅋ requires more time than ㄱ; ㄱ than ㄲ. No Koreans will deny that reading out 키 takes more air out at the beginning than pronouncing 끼 and 기. According to the standard Korean dictionary, ㄲ, ㄸ, ㅃ, ㅆ, and ㅉ are pronounced with almost no aspiration. Therefore, such a difference should relate to the aspiration.

I think this is not an answer what you expected, Native speakers can understand if foriegners mispronounced the words because they catch its meaning by overall context not a sound of every characeters. This is very unconscious.

Think about English, there're also fly(verb) and fly(bug) which are exactly same. But nobody confuse them.

So, The important part is, keep focusing on whole sentences, not a pronunciation of each characters.

Not the answer you're looking for? Browse other questions tagged pronunciation listening or ask your own question.

0
Difference betwen the honorofics 씨 vs 시
1
Is there any difference in pronunciation between 학교 and 하교?

7
ㅗ and ㅛ sound about the same to me. Can they be used interchangeably?
9
How can we infer the pronunciation of now obsolete Hangul characters?
5
In the pronunciation of 잘할게, the 할 sounds likeㄱ+ㅏ+ㄹ, and 게 sounds like ㄲ + ㅔ, and I'm confused
2
In which dialect are 애 and 에 pronounced differently?
1
Is there any difference in pronunciation between 학교 and 하교?
4
Is the initial ㅎ not pronounced sometimes?
3
Pronunciation difference between ᄉ and ᄊ
0
What is the rule and for how "ㅏ" + "ㄹ" can sound like "ㅐ" in words like 팔각형?
0
Why does ㅗ *o* sometimes sound like ㅜ *u*?
3
Words like 호랑이/고양이/아지랭이 vs. words like 호박잎/콩잎/부엌일, what is the difference regarding the consonant(s) before the final "ㅣ"?