Do all Sino-Korean words have exactly one reading?

In Mandarin, if you see "風車", you know it says "fēngchē". But in Japanese, if you see the same two characters, you don't know if it's "kazaguruma" or "fūsha". Roughly, those Japanese words are two words for the same thing, which are written the same way.

What is the situation in Korean? Given a Sino-Korean word, does it have exactly one reading as in Mandarin1, or could it have several readings as in Japanese?

Probably you know that a Hanja character may have more than one pronunciation. For example, 樂 has seven different pronunciations, 락, 악, 낙, 요, 료, 록, 로. (낙 is derived by the word-initial rule 두음법칙 applied to 락. 료, 록, 로 are very rare readings which have few usage, mostly for reading particular phrases in classical Chinese texts.)

One example is 更新. 更 is read either 경 or 갱. When read 경, it means 'to fix, replace, or change'. ('고칠 경') When read 갱, it means 'to repeat, or to do something again'. ('다시 경') The second character 新 basically means 'new', and has a unique reading 신.

So 갱신(更新) means 'to do something again to make it new', as in renewing a house rent at the end of the contract. You would say "계약을 갱신하다" in Korean, 계약 being contract.

On the other hand, 경신(更新) literally means 'to replace a thing with something new, and it usually means 'to break a record (and make a newer high score).' You would say "기록을 경신하다" in Korean, 기록 being record.

In some other cases, the choice of pronunciation becomes arbitrary. One example is about the character 暴. It has a wide range of meanings, and has three different pronunciations, 폭, 포, and 박. When it means 'violent or fierce', it can be pronounced either 폭 or 포 ('사나울 폭/포'). A handful of words with the character allows arbitrary choice between 폭 and 포, while others have a fixed reading. One of those words is 흉폭(凶暴). 凶 means 'brutal', and the word means 'brutal and violent.' It can be read as either 흉포 or 흉폭.

To summarize, it is VERY rare for a Sino-Korean word of same characters have more than one pronunciation, but there are a few cases. The different reading may be because of a different meaning, or may just be open to arbitrary choice.

In all character-using languages (Chinese, Japanese, Korean, Vietnamese), the core principle is the same: characters, or a combination of characters, have as many readings as the number of words they represent.

In Mandarin, if you see "風車", you know it says "fēngchē". But in Japanese, if you see the same two characters, you don't know if it's "kazaguruma" or "fūsha".

Think carefully about why this is true: you know it says fēngchē because fēngchē is a word.

Similarly, you are unsure if it's kazaguruma or fūsha because they are both words. You are definitely sure, for example, that it's not kazekuruma, because kazekuruma is not a word. We can clear the reading up by providing some context: the word fūsha only means windmill, while the word kazaguruma can mean both windmill and pinwheel (among others). So, when you see a sentence like

Hey, the wind is blowing, let's spin some 風車

you will be pretty sure that 風車 is not pronounced fūsha, because you won't say to your friend to play with some windmill buildings. Similarly, if you see

you will be pretty sure that it is not pronounced yínxíng in Mandarin, because yínxíng is not a word.

All Sino-xenic languages (Japanese, Korean, Vietnamese) have assigned characters to both Chinese-imported words/morphemes and native words/morphemes. The difference between Japanese and the other two is that Japanese tend to assign characters to polysyllabic words which sound nothing like the Chinese reading, while Korean and Vietnamese tend to assign characters to single-syllable native morphemes or words only if they also sound similar (there are exceptions, of course). Most of the time, multiple readings for hanja exist only if Chinese already had multiple readings.

Single-character multi-reading words are abundant; an easy way to find multi-reading Sino-Korean multiple-character words is to firstly go through a list of multi-reading Chinese words (e.g. 多音詞 on 百度), and seeing if any of them are imported into Korean. Here's one for 落魄: 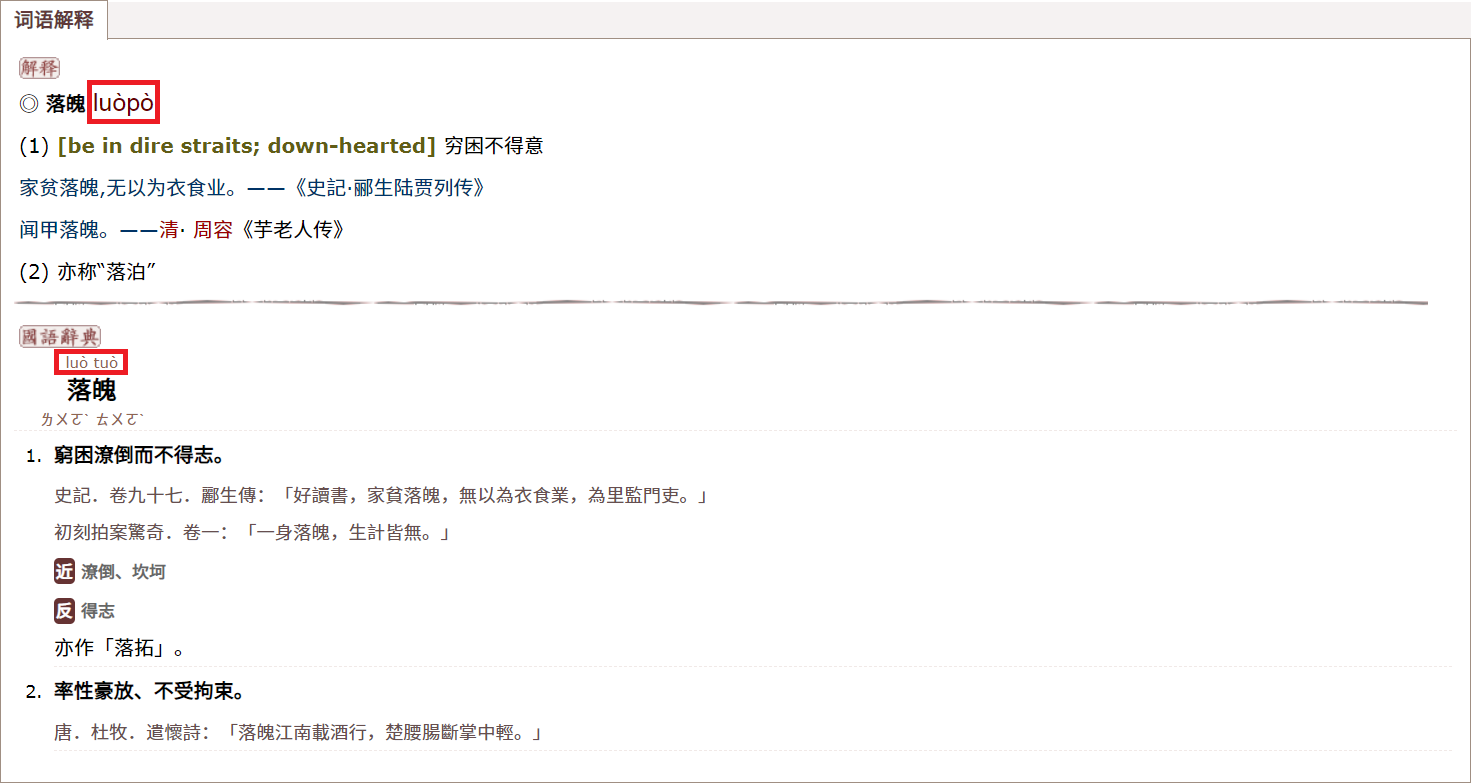 This corresponds to Korean 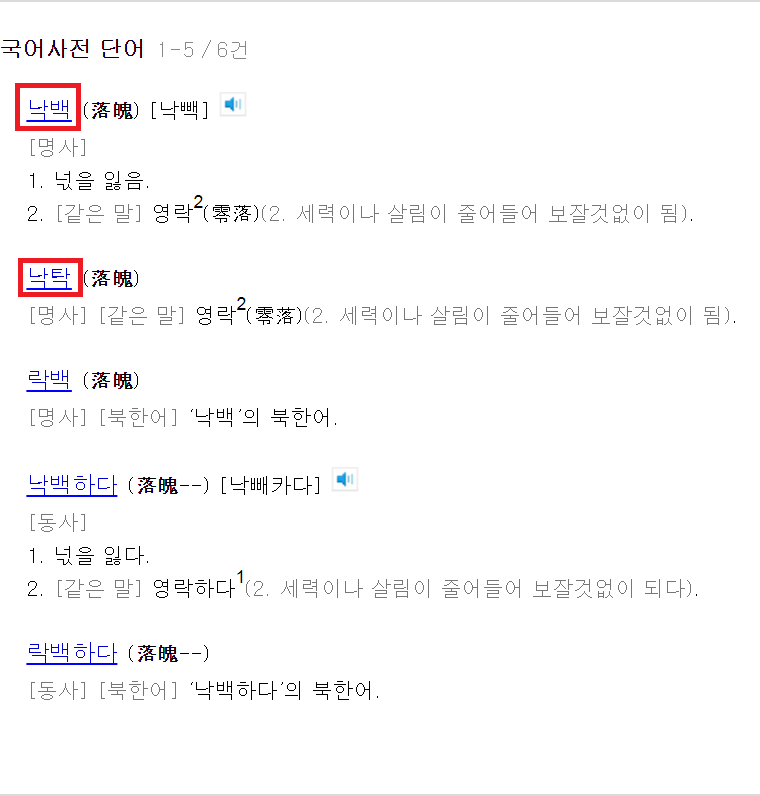 Not the answer you're looking for? Browse other questions tagged pronunciation hanja sino-korean-words or ask your own question.

10
Are ordinary native Korean speakers capable of understanding individual Japanese kanji words in written form?
8
Are all words from Chinese characters (한자어) nouns?
4
Linking sound in 11월 and 12월
2
Chinese character pronunciation in Japanese vs Korean
2
식식하게 or 씩씩하게 목소리 높여? Which did I hear in a song?
4
How does A Korean Odyssey (화유기) derive the character names?
5
Do Korean share more vocabulary with Chinese or Japanese?
8
Korean words whose pronunciation differs unpredictably from the spelling
8
Unusual hangeul syllables in 1920's handwritten Korean?
2
Does North Korean have a minimal pair with palatalization of ㅈ/ㅉ/ㅊ amongst Sino-Korean words?