Is the Korean alphabet to English charts the pronunciation or the actual meaning in English?

I’m a relatively confused Korean student who is very interested in learning but I have hit a wall. I understand the forming of a word using blocks/the structure, but the “alphabet” charts are confusing me. 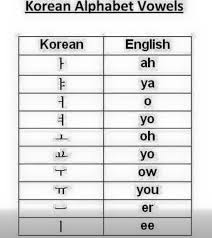 Are those English translations or pronunciations? Does “ㅏ” quite literally mean “A” or is that how it’s pronounced?

This chart is for Korean vowels

The chart in the question shows the pronunciation of the vowel sounds, but since the vowel characters are not used by themselves, their pronunciation is also the word used to refer to them

For example, the sound Ga is formed by the vowel ㄱ followed by the consonant ㅏ(ah) to give Ga (가)

Note that most Korean sounds do not have an exact English equivalent, so although ㅏ has been transliterated into English as 'ah', the 'h' at the end is not pronounced. The pronunciation is more like 'aa'

Also note that the consonants, on the other hand hand, each have their own name

9
Why did the Cia cia tribe in Indonesia choose 한 글 for the alphabet?
5
What's the correct representation of letter "j" in korean?
5
Why is the Korean language sometimes called Hangul?
3
How many different "blocks" can be formed from the letters of the korean alphabet?
8
Korean words whose pronunciation differs unpredictably from the spelling
0
What Korean reader software aimed at learning pronunciation is available?