Is there any rule relating to ㅣ+ㅓ = ㅔ notㅐ? If we change the order of the combination then it makes sense to have ㅓ+ㅣ= ㅔ.

I have just come across a list as below. I'd like to know if there is any rule for this or should we memorize them by hard?

The list that you found is rather peculiar. Technically, the first 5 examples are deceiving. From what I'm deducing, you should treat ㅣ as a . or a small ㅣ. When a vowel already has a protruding little line, then adding the . or small ㅣ results in another protruding little line next to the previous one, making the vowel sound like it begins with a "y".

The reason why I'm referring to a . is because when Korean alphabet was first introduced, the protruding parts were referred as a dot like in the image below. 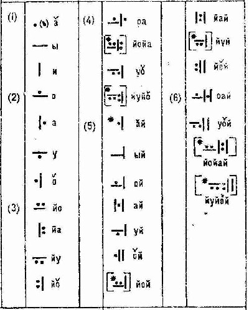 When combining Korean character ㅣ with other vowels, it is always put at the end of the other vowel.

Not the answer you're looking for? Browse other questions tagged vocabulary pronunciation or ask your own question.

12
Are there rules that govern how certain characters are pronounced and when?
9
How to say or suggest in an informal (and possibly rude) way that someone can be disregarded?
7
Intonations in Korean
5
Pronunciation of 낯익다
4
If ㅆ meets the consonant ㅅ, will the resulting sound be a double " ss "?
2
Pronunciation of Two-Consonant patchim
5
In the pronunciation of 잘할게, the 할 sounds likeㄱ+ㅏ+ㄹ, and 게 sounds like ㄲ + ㅔ, and I'm confused
1
Is there any difference in pronunciation between 학교 and 하교?
3
Any good online alternative for "Handbook of Korean Vocabulary"
8
Korean words whose pronunciation differs unpredictably from the spelling