What is the significance of the Korean voting stamp?

When voting at an election, Koreans mark their ballots with a specially shaped stamp. Does this stamp have any significance related to the Korean language?

The stamp is shaped like a "peace" symbol missing the left branch (a circle with some lines in it): 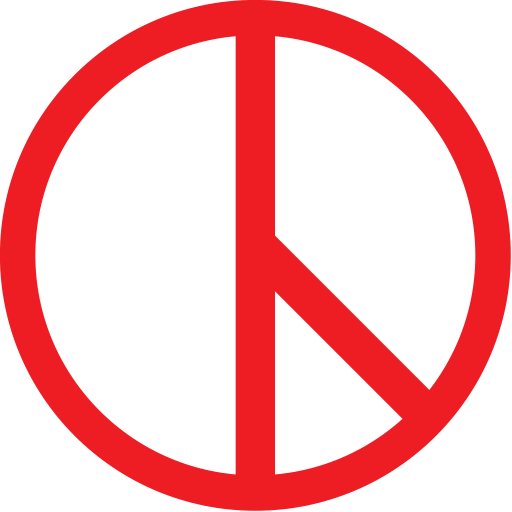 ...is the Hanja for 'fortune telling' or 'divination'.

The first elections in South Korea were held in 1948 under the auspices of the US Army Military Government. Voters at polling booths used a circular stamp or sign (“○”) with no circumscribed shaped inside to mark down their candidates of choice. Resources were so inadequate that people resorted to using the round edges of pen caps to indicate their votes. The Korean War from 1950 to 1953 devastated the country even further. In the elections immediately after war, voters used bamboo branches and even bullet casings to mark their votes. While Korea’s economy vastly improved in the following decades, the plain circular mark continued to be used.

The plain circular mark, however, had a few practical problems. When they are cast, the ballots on which the mark is recorded are folded. In many instances, this caused in the dye being transposed onto the contacting side, thereby resulting in invalid votes. In 1992, the Chinese character 人(인) for “person” was added and circumscribed into the circular voting stamp to remedy this problem. The addition of this character shape, however, did not completely resolve the issue with invalid votes, since the character 人 is somewhat symmetric. The dye transposed onto the folded side of the ballot was still indistinguishable from from the side where the mark was originally stamp.

During the presidential elections of 1994, another issue arose. The character 人 was seen as too similar to the si-ot ㅅ in candidate Kim Young-sam’s (金泳三, 김영삼, 1927-2015) name and ultimately viewed as favoring him. (Kim Young-sam would indeed later go onto win the presidential election, becoming the first civilian to hold the Korean presidential office in three decades.) To address this problem, the character 人 was changed to 卜(복). This alteration also finally resolved the issue of invalid votes resulting from the dye being transposed onto the other side of the ballot. Since the character 卜 is asymmetric, election talliers would be able to distinguish the transposed mark from the original mark.

The character 卜 also carries multiple meanings, highly pertinent to the rite of voting. It can mean “to foretell” (점치다), “to consider in detail” (상고하다), or “to count” (헤아리다). And this is why the voting stamps in Korean elections have the character 卜.

In the international Semaphore Flag System, the symbol coincides with the following Latin alphabets and their potential interpretations:

14
How does 15th Century Hangul writing/type differ from modern Hangul?
2
Is Korean an official language in South Korea?
8
How widely spoken was Korean during the Japanese occupation?
2
What was the original value of syllable-initial ᆼ (ㆁ)?
3
Why do the consonants ㄱ, ㄷ, and ㅅ have irregular names?
3
Are some sounds more pleasing to the ear, like ㄴ and ㅁ?
8
Unusual hangeul syllables in 1920's handwritten Korean?
2
Historical Text: how to translate domesticated animals 謂牛馬雞犬
4
Does foreknowledge of Cantonese, rather than Mandarin, assist you more in learning Korean?
4
How important is Old Hangul in modern Korean culture?