Is there a pronunciation difference between ᄉᅻᆯ and 서울?

I know that the central vowel in ᄉᅻᆯ (

if it doesn't render as a single syllable) is archaic. I know that Hangul/Korean has over the years simplified itself greatly, sometimes getting rid of redundant letters, sometimes getting actually changing the pronunciation of words. I'm not sure which case these double vowels are.

I see a lot of ieungs in Korean, e.g. 서울, which could be eliminated using an archaic double vowel or sometimes a double consonant. I'm not sure if that's strictly equivalent, though.

No, ᄉᅻᆯ would not be equivalent to 서울 even if it somehow was used in modern Hangul. ᄉᅻᆯ is one syllable, 서울 is two. Korean is a syllable-timed language, so a single syllable and two syllables are pronounced differently. So 우울하다 is different from 울하다, 미인 is different from 민.

That archaic vowel was never used to write down Korean. As far as I know, that vowel was only used to transcribe vernacular Chinese(Mandarin) in language learning books. Here's a page from 노걸대언해 from the 18th century(Notice ᅸ, ᆣ, etc): 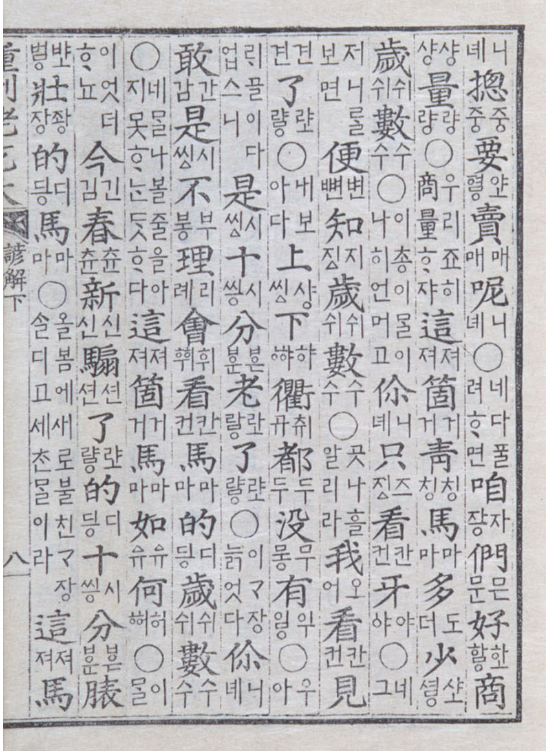 First of all since ᄉᅻᆯ is unprintable by the normal Korean computer keyboard, it is NOT a Korean syllable, hence has got no pronunciation,(I GUESS YOU GOT THE SUPER KEYBOARD).. even if you wanted it to be a slang for 서울 it wouldn't sound. For example 솰(swal) and 쏼 (sswal) they are printable in the Korean Computer Keyboard and have got pronunciation but they have no meaning..

6
Are there any online tools available for entering Korean text?
10
Is there a concept of letter names in Korean?
3
How can I include Hangul and Hanja in a website?
2
Is there a reliable Hangul online transliteration service using Japanese kana?
3
Is the Korean alphabet to English charts the pronunciation or the actual meaning in English?
8
Korean words whose pronunciation differs unpredictably from the spelling
0
Pronunciation of 옥류관(玉流館)
0
What Korean reader software aimed at learning pronunciation is available?
3
Distinguishing between nearly identical letters. (ㅎ and 종)
2
Is there a hangul syllable frequency list? (or most common every day hangul syllables?)