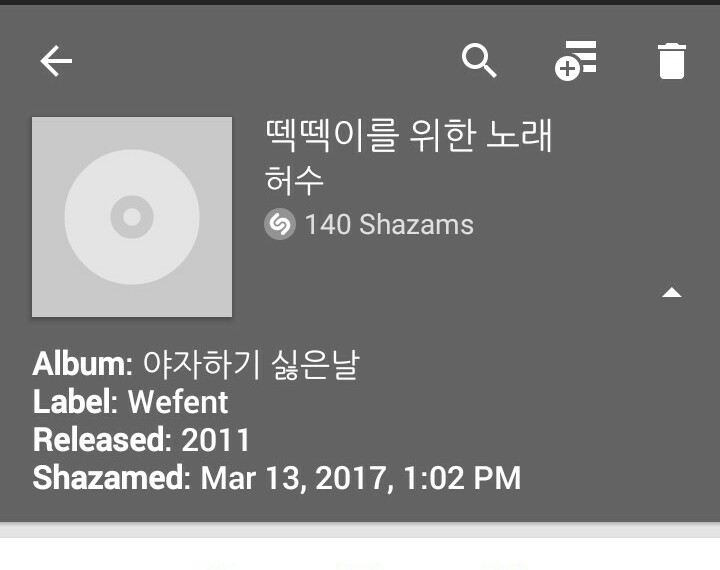 Can someone translate this song's title and album in English. I do think it's Korean.

The best I can come up with for the song is "Song for the Loud Mouth." The "loud mouth" here is not a literal translation. I have tried to work the phrase "떽떽이" into meaningful English here. "떽떽이" is an idiom of sorts. I have heard it used on the context of a "loud mouth" or a person who cannot stop running their mouth.

The album title is also a bit hard to nuance. 야자하기 is probably referring to the act of speaking to one another informally like friends. Think of it sort of like using slang/familiar language. Korean is heavily based on using the correct register (politeness level) when speaking to someone. 야자 time refers to the times when you speak to people like close friends or in a familiar register.

This all assumes that the album is not speaking about "hating doing a coconut," which of course makes absolutely no sense.

Since a lot of idiomatic language is in play here, all of these translations sound forced and unnatural in English. Perhaps someone can produce a better rendering. The album name uses slang for a practice that English speaking countries do not have a word for really, hence the title of the album is a but hard to briefly translate accurately. (And it is even harder to accurately make it sound like an album with a "normal" English title).

There seems to be official English names for the songs. This turned up when I searched on Google, doesn't seem to be machine translated, but can't find the real source for now:

The whole album seems to be about high school life.

Not the answer you're looking for? Browse other questions tagged translation or ask your own question.

5
Translation: using the remote past for events preceding a past event
2
How can I say "that's her thing", in the sense of something that someone does well?
3
What does this notification mean?
4
What's the English title of "금수회의록" by 안국선?
1
Help to translate "No matter how difficult and hard something is, I will always be positive and smile like an idiot."
1
Verification of translation of word on KPOP album
0
I want to translate the title of a Korean children's reader into English
1
How can I translate the word 지룡전 into English? I am not able to find any translation in google
1
Can someone translate this "요즘 모하고지내요!" please