Does standard Korean still contain any signs of being a tonal language?

This answer mentions that some dialects have tones even in modern Korean, but I've always assumed that standard Korean is essentially a non-tonal language. However, I've read in this source that this may not be entirely true:

the "long syllable rule" is still taught in school in a standard curriculum...
There are many more examples of Korean language's tonal vestiges

What aspects of tonality might a foreign learner be able to spot, or even use to their advantage in speaking?

According to The Korean Language by Iksop Lee and S. Robert Ramsey, modern Korean dialects have either tones or vowel lengths or neither, but never both (see map below). The authors do recognize that the importance of vowel length is fading especially with the younger generation, so these vestiges of Middle Korean will only be manifest in regional dialects as tones and standard Korean will have neither tones nor lengths (if that is not true already). The book goes into more detail on the subject if you want to learn more. 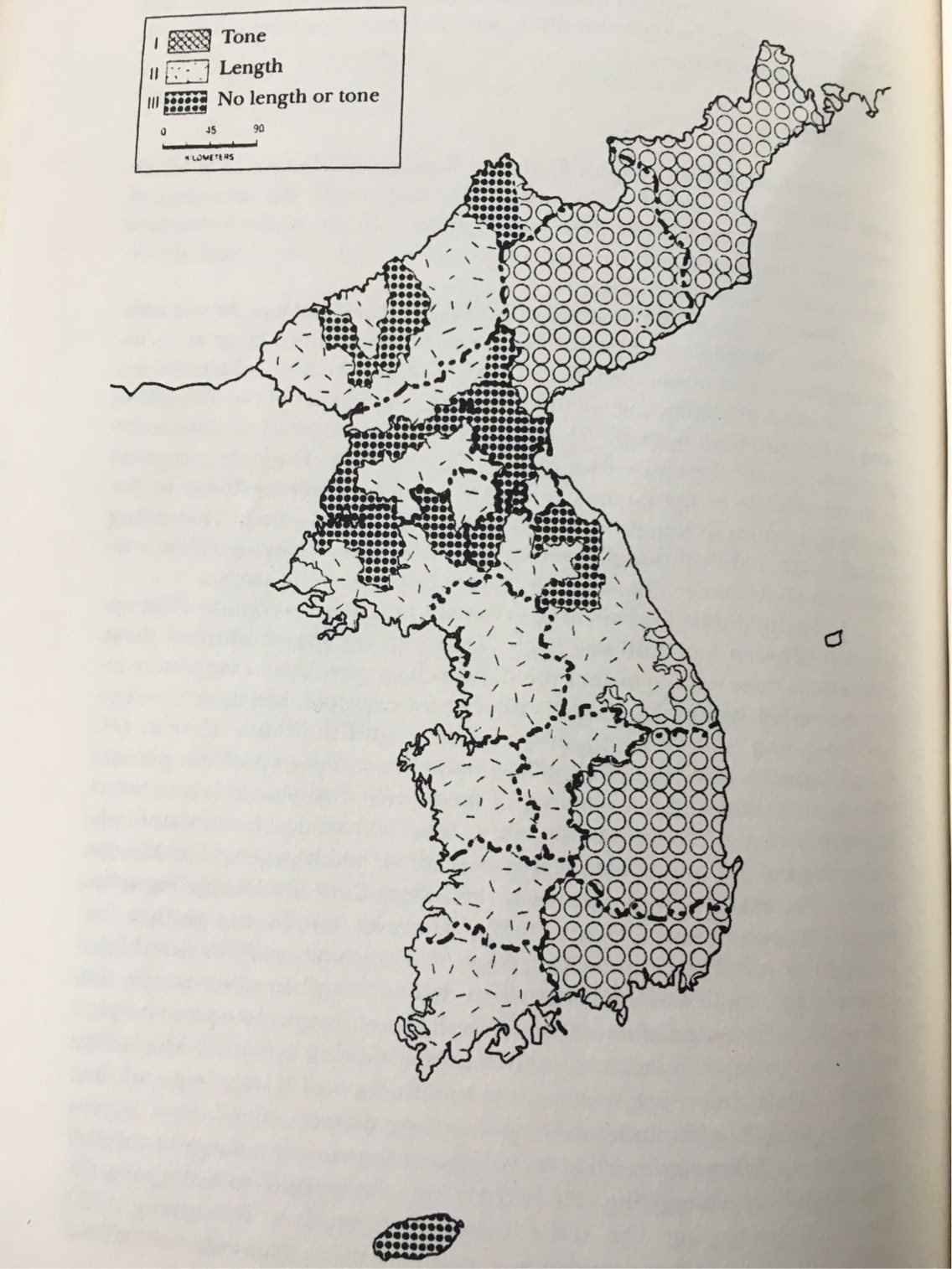 (Disclaimer: Everything below applies to Korean spoken around Seoul area. I don't know the state of vowel length distinction in other areas.)

Well, the sentence you partially quoted already answers the question:

Although the "long syllable rule" is still taught in school in a standard curriculum for Korean language, vast majority of Koreans quickly forget the rule as soon as the final exam is over. So if you are a Korean language learner, there is no need to bother learning this rule.

I would paraphrase it as: Although the "long syllable rule" is still taught in school, the rule no longer holds, so most Koreans have to "learn" the rule by memorizing the list of long/short words, which they quickly forget once they're past the exam.

Contrast that with an actual sound distinction that native speakers still make. Can you imagine an English-speaking kid "forgetting" that "that" and "thin" has different "th" sound, once the exam is over? Of course not! There is an actual difference, and every native speaker makes the distinction, so you can't forget that any more than you can forget "did" is the past of "do".

In contrast, vowel length distinction is an obsolete rule in Seoul area; tones died even earlier. I think most people claiming to "subconsciously" making the distinction are just good at fooling themselves.

My parents were born and lived in the Gyeongsang region for over 30 years; and I was raised near Seoul. And sometimes, when I say something, they laugh and say "that's not how you say that word," and they repeat the word "correctly", exactly the same way I said it but with a different inotation. That's happened countless times, and that, I think, is some pretty strong evidence for tones (or pitch accents) in dialects.

7
Intonations in Korean
4
Pitch accent in Korean
3
Does foreknowledge of Cantonese, rather than Mandarin, assist you more in learning Korean?
1
Distinguish length of vowels?
0
What does the number in superscript next to the Hangeul mean in Naver Dictionary?

5
Is there any program for Microsoft Windows for dictating Korean text?
2
Is Korean an official language in South Korea?
2
The relationship between attributive adjective postposition(관형격 조사)'ㅅ' in medival Korean language and 사이시옷 in modern Korean language
3
Does Korean pronunciation sometimes differ in singing / rapping compared to spoken language?
1
Does the liaison always happen in Korean?
2
Vowel for Yanbian Dialect
8
Unusual hangeul syllables in 1920's handwritten Korean?
3
Does foreknowledge of Cantonese, rather than Mandarin, assist you more in learning Korean?