I have seen different fonts in Korean. Some are considered cuter than others. What makes them be perceived as cute? Are there some examples of cute handwriting? (in your opinion)

Also, is it acceptable to write a 'ㅎ' with just one horizontal line above the 'ㅇ'?

My Hangul is still not very good. As a learner, I find I have difficulty with 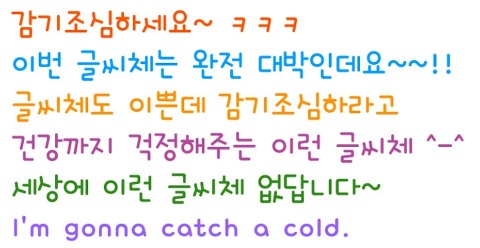 In this example, you can see the '퀴' is not tightly arranged:

I make these 'mistakes' all the time; accordingly, people often see my writing as 'cute'!

I would agree that "cute" is a bit subjective, but the "cute" fonts I've seen are generally somewhere between a "proper/formal" font, and the handwriting of a child, where you find the imbalances in spacing and size, which are common to children or people just learning to write.

In addition, one could associate thick, rounded strokes with rounded ends and lack of serifs in that colored font:

versus one that doesn't have those qualities:

The fonts just replicate certain aspects of that imbalance while still maintaining legibility.

Also, is it acceptable to write a 'ㅎ' with just one horizontal line above the 'ㅇ'?

No, that would be like writing a K without the one of the lines. It wouldn't be considered a letter. :)

When I was in school one of my classmate's handwriting was cute, but hard to read. My guess is, it depends on the person who is writing, someone who has good handwriting and knows cuteness maybe they can write cute Korean.

If you are talking about font in computer take a look link below.

Q> Also, is it acceptable to write a 'ㅎ' with just one horizontal line above the 'ㅇ'?

19
Should I learn Hangul as soon as I start learning Korean?
6
Are there any online tools available for entering Korean text?
13
How does 15th Century Hangul writing/type differ from modern Hangul?
10
Is there a concept of letter names in Korean?
5
What's the correct representation of letter "j" in korean?
5
Why is the Korean language sometimes called Hangul?
3
Is the Korean alphabet to English charts the pronunciation or the actual meaning in English?
3
How many different "blocks" can be formed from the letters of the korean alphabet?
0
What Korean reader software aimed at learning pronunciation is available?
1
is 'ㄹ' from 'ㅌ' in korean creation?