Do the shapes of Hangul characters have any significance?

I can see that there is an obvious correlation between ㅜ and ㅠ, and ㅏ and ㅑ. But do all the vowels shapes in general relate to each other in any special way?

What about the consonant shapes like ㅈ, ㅂ, ㄷ, and so on? Are the shapes random or do they have significance?

The shapes of Hangul consonants were derived from shapes of tongue, throat and mouth when they were spoken. I found a good image explaining it! 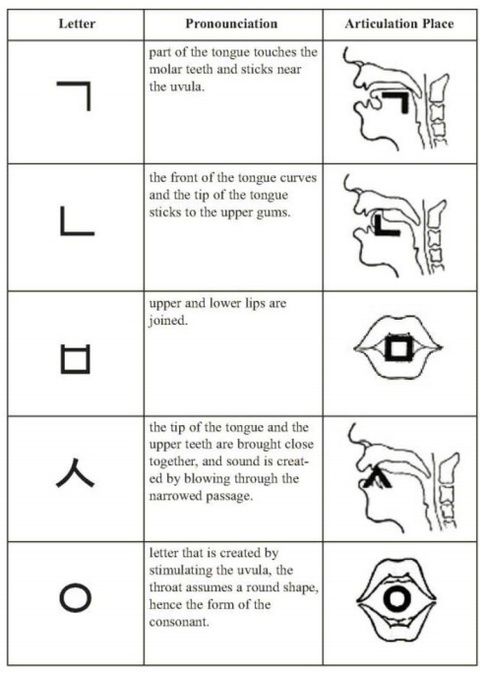 Adding on to what the previous user answered, the vowels are made of three components, 하늘 (sky) ㆍ, 땅 (earth) — , and 사람 (person) | . Combinations of these three make the vowels. For example, the vowel ㅓ would have originally been written like this: ㆎ with 하늘 and 사람 unconnected. ㅗ would be 하늘 above 땅, and so on!

The document was published only a few years after introduction of the script and thus there's high likelihood that it gives truthful account.

Of course it's also possible for the document to gloss over some bits and emphasise cultural norms at the time over practical reasons for vowel glyphs. That is document could have been created to prove worthiness of the script rather than as a historical account.

Thus, I would view yin/yang vowels as artefact rather than deliberate design feature.

Likewise, even if consonants correspond to the shape of tongue and mouth (why these two? why for those specific consonants? why head looking left?) it may or may not be the reason that consonants were created like this.

Whether glyphs were designed according to current understanding or got their shapes accidentally (or the mix thereof), they creators were certainly at least inspired by other writing systems.

Where did the inspiration come from?

If the tale of design by committee is true, surely the scholars had knowledge about these scripts and texts for most of these (Buddhist monks travelled a lot, and had scrolls).

13
How does 15th Century Hangul writing/type differ from modern Hangul?
3
How can I include Hangul and Hanja in a website?
4
Why is 한국어 not spelled as 한구거?
1
Accurate quote of 훈민정음 Hunminjeongeum
8
Korean words whose pronunciation differs unpredictably from the spelling
8
Unusual hangeul syllables in 1920's handwritten Korean?
2
Why is ㅂ sometimes pronounced as ㅁ? What are the rules?
3
Distinguishing between nearly identical letters. (ㅎ and 종)
1
Beginner learner of Hangul seeking clarifications