I do live in a hole geographically, and I highly doubt that I could find a Korean person in a 100 miles radius (let alone a Korean teacher) :) I am aware of difficulties of learning a foreign language (English is my 3rd language) and I have already learnt 한글 and can read and pronounce it (though, since there is no Korean around to check it out, maybe my pronunciation more of Joey-of-Friends-learning-French type). This is where I stuck, since I just don't know where and how to move from here...

I do enjoy Korean TV and was wandering if watching it with 한글 subtitles will help me with my learning, but my abilities are nowhere near yet.

Thank you in advance!

Learning any language can be difficult. That being said, Korean can be quite a challenge if you are only used to reading romanized characters. Learning the Korean alphabet would be the first step which you have already started to learn and study.

As you mentioned, next would be pronunciation and with this new challenge the learning curve becomes a more steep. Although Korean is a phonetic language, some of the sounds, when combined, will feel strange at first. But with practice, the mouth and tongue can become familiar with the twists and turns they need to make the correct sound.

Lots of exposure to the language is the best way to make constant progress. And with that I mean to say, Korean music, television shows and movies. As this would give you a better sense of how the natural speaker might sound.

If you are not living in a metropolitan area where you can meet up with other individuals who are also eager to learn the language, there are resources online to make connections. Such as sites like Penpal Korea and Korea 4 Friend. Meetup also is a good way to make connections for language exchange.

If you own a smartphone there are tons of applications that are ready available and free. What I find valuable is that most of these applications have audio which will also aid you in fully understanding the proper way to pronounce Korean words.

This is an interesting question. I hope that one day someone, more qualified than me, will devise an effective learning path that we can offer (to absolute beginners) as a "standard path to learn Korean" here on stackexchange.

Meanwhile, I can tell you how I'm facing this task. I have to go to the Republic of Korea for a few weeks, next summer, and I'm teaching myself Korean as fast as I can since January. Korean is the fourth language I studied in my life, after French (at a public school, for eight years), English (language schools, many years) and German (language schools, four years). It is my second attempt to an Asian language after a year-or-so of Japanese.

The first step must be Hangul, as you already made. I discovered that the best resource for this task in a Android App called "Write it! Hangul". It is an app specifically devised to teach you the right way to read, write and pronounce the Hangul "alphabet" (even the right stroke order...). It uses a game-like approach and is very addictive. In a few hours (at worst a couple of days), you can learn Hangul well enough to read and write it without any hesitation.

Two other very good Android apps (both by Edsoft Apps) for these tasks are:

The second step, IMHO, must be a couple of good introductory books. Please note the plural. I still have to find a single textbook (regarding any foreign language) that can actually teach you a language when used alone. I always had to buy, study and "chew" at least two or three books, one after the other, to actually manage the basics of any language I studied in my life and Korean was no exception. The three books I used were:

"Korean Made Simple" by Billy Go.
Very nice and very well "engineered" book. It proposes a little unusual way to study Korean because it favors the very formal ~니다 form of verbs and sentences over the more common ~요 one. Billy Go explains that he made this choice in order to simplify the first part of the learning path. I did not have any problem to pass to ~요 form later. Strongly suggested book.

"Lingua Coreana" by Andrea De Benedittis (Italian)
This is an Italian book I bought and studied just to see what the Italian market had to offer. It is not a bad book but the other ones are much better, IMHO.

Once you have a more-or-less clear "vision" of the Korean grammar, the main problem is vocabulary. As for grammar, I still have to find a single resource that can tell you the basic vocabulary of a language when used alone. For Korean, I'm using an app for Android called "Learn Korean Free WordPower" by Innovative Language Learning, LLC. I bought the premium version and I'm very satisfied with it. Besides this app, I'm using Memrise (quite disappointing, to be honest) and a few other websites and apps.

The most helping resources to learn Korean vocabulary, IMO, are the Video Blogs of Billy Go, George Trombley, Mina Oh (sweetandtastytv), and of the "Talk To Me In Korean" staff on YouTube.

I use Google Translator and Naver Translator to test my speaking. If either or both of these AI-based apps are able to understand what I'm saying, I can usually infer that I would be also understood by a native speaker (I already met a few Korean friends and I can confirm that this is usually the case). At the moment, I do not dare to write or speak Korean to anybody.

My next step will be... testing my knowledge of the language in the field. For this task, I plan to use HelloTalk, HiNative and Italki. Here is where I will actually try to write and speak Korean. It will still take some time to get there, anyway.

The last step of this learning plan, before the "first blood" in Korea, will be some chatting on KakaoTalk, the main IM/Chatting app used in Korea. Maybe during the 24-hours-long trip to Seoul... ;-)

BTW: an unexpected problem was the computer keyboard. I have a Linux Mint laptop with an Italian keyboard and I found quite uncomfortable to type Hangul. At first, I used the Branah Hangul Keyboard online (see: https://www.branah.com/korean) or the Google Translator one. Now I'm using a custom Hangul layout for the "OnBoard" on-screen keyboard I prepared myself (I'm a programmer. This is my job...). You can find it at Launchpad: https://launchpad.net/onboard . I'm using GITHub Atom as an Editor and LibreOffice as a WordProcessor.

In addition to what others have already said, having studied semi-independently for the first year or so, I want to stress the importance of interacting with real Koreans (or even other Korean learners in Korean) from the beginning. When I was first starting about 12 years ago and finally did join a class, I was shocked how much I didn't know. I knew a lot of grammar, but I couldn't really piece together a sentence on the fly and was missing a lot of basics. There are so many more resources online these days, so you are lucky to be starting now. If you don't have Koreans near you, I'd highly recommend using something like iTalki and pay a private tutor to talk at least once a week. I've used it some and it can be really helpful.

I think you've made the right choice to learn 한글 first - it opens up Korean sources from 'real life', and means that everything you learn from now on will be reinforcing your knowledge of 한글.

People vary in their ability to 'just pick up' a language, but I'd recommend for most people that they follow a well designed course (whether a book, a website, or a class) that will get them up to lower intermediate level and build knowledge of the structure the language. Following a course is good if you can trust it to teach you things in an order that makes sense. I'm not sure exactly what course I'd recommend - I did pick up a book, but I'm not sure it was the best one.

Once you have the basics down I think it's important to follow your passion when it comes to filling in the gaps and building familiarly. As it seems you have an interest in songs, TV and films, it would be great to choose some favourites to learn from and pick up some knowledge in context. Some people find songs particularly useful as they can help vocabulary stick in your head.

I think it's hard to avoid picking up bad habits without having an opportunity to try your language out with a real Korean. There are opportunities to practice online (e.g. italki, hellotalk); and if you can find a Korean somewhere near you, they may be delighted to meet you!

Of course also bear this site in mind for particular focused questions that you want answers to. Reddit Korean is good for a more informal style of Q and A, and the aforementioned Italki also has a discussions page. 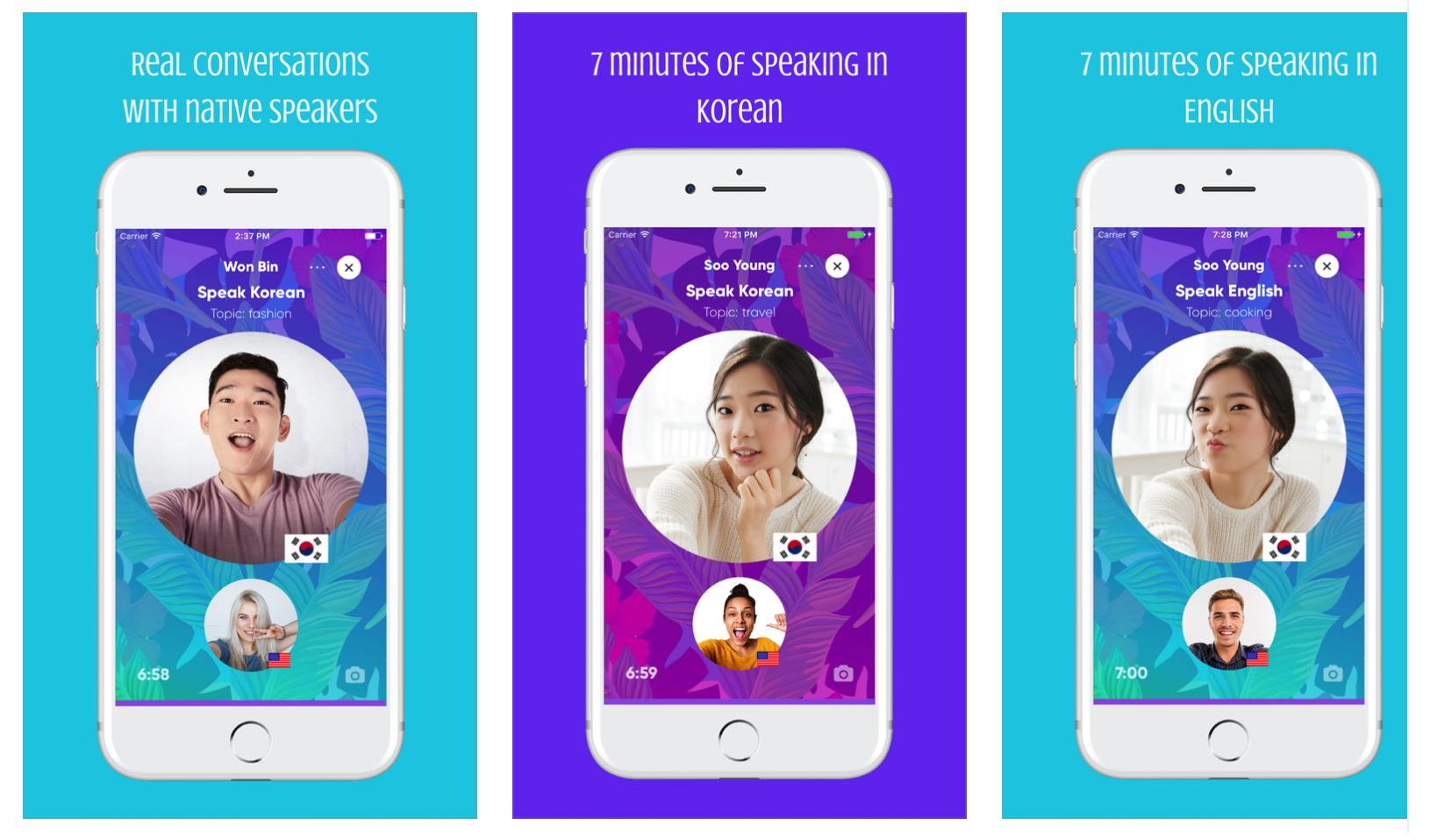 P.S. I'm the creator of the app, so please let me know if you have any suggestions :)

A pretty good resource you could consider if you are looking to build your Korean vocabulary is the flashcard app called Beginner Korean app. The app introduces its users to commonly used Korean words and phrases from scratch.

Alternatively, if you are looking for more challenge or practice with your Korean vocabulary, you could also try Topik Locker app which is for intermediate to advance learners of the Korean language.

Not the answer you're looking for? Browse other questions tagged vocabulary hangul spoken-korean beginners or ask your own question.

19
Should I learn Hangul as soon as I start learning Korean?
6
Why does Google ask me if I meant "South Korea" (*in Korean*) when searching for "eogksalsrnr"?
6
When to use single (ㅅ) or double (ㅆ) consonants?
8
What is a good online resource or app (Android,PC) to start learning Korean from the very beginning?
5
Why is the Korean language sometimes called Hangul?
0
When to use 은/는 or 이/가 after subject
0
What Korean reader software aimed at learning pronunciation is available?
0
Great Korean Learning Textbooks: i.e TTMIK
0
I'm new to learning Korean, and I'm really excited, but, I'm not sure where to start. Does anyone have any tips for a newbie like me?