How to interpret the text on this “희창기계” (Huichang Machine)?

I found this photograph of a machine (which produces plastic pipes) on Japanese.SE: 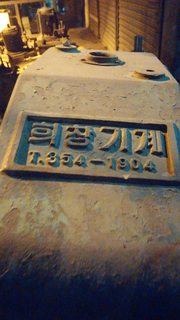 I know that 기계(gigye, 機械) means 'Machine', but I am unsure how to interpret the other text in "희창기계". (when I search for "Huichang Machine", I get many results that look like company names).

I got interested because i thought it was a grave (tombstone) of a legendary figure who lived for 1000+ years. w w w

I found following information on google. (you can find more on google)

1) I'm pretty sure that 희창(Huichang) is a name of a male person. I(Korean) had a friend named 희창. I don't know the Chinese characters for the name, though. So, 희창기계 is must be a company founded by a guy named 희창 like Hewlett-Packard or Dell or Procter & Gamble.

Let me know if you have any other questions.

Not the answer you're looking for? Browse other questions tagged translation character-meanings or ask your own question.

3
What is the translation of the label on this piece of agricultural equipment?
2
How can I break down this sentence to translate it 'literally' one piece at a time?
3
What do the characters I've found on this old gun mean?
1
What is being said in this audio clip from the movie The Wolf Brigate?
0
Please help me translate this sentence
1
How to express “ I had already quit this company at the end of May 2020.” in Korean?
2
Historical Text: how to translate domesticated animals 謂牛馬雞犬