Is there an easy way to tell whether any given Korean name is typically male or female?

This was one of our definition questions and it interests me. Are Korean names usually explicitly gendered? Are there any common forms/variants used to denote particular genders?

To preface my answer, let me first say that I am not myself Korean. I lived in Korea for 2 years and got a degree in Korean, but I obviously do not know every naming practice used in Korea. These are just my personal observations as a non-native speaker.

While there is no definitive pattern for naming that I am aware of, there certainly are indicators that a name is "male" or "female."

For me (Before, I lived in Korea for few years; Now, I work in US while still commonly interacting with Koreans), there are some general rules I have used for determining if a name is feminine or masculine.

There is not an exact science to this. I would compare it to hearing the name "Butch" and presuming it is a man, or hearing the name "Laurel" and presuming it is a woman. No one ever sat me down and told me that "Butch" was a masculine name; it just feels "right" to say it is a masculine name. Learning to recognize the "gender" of a name was an organic and natural part of learning Korean for me.

Some common wild card characters are 상 (sang), 성 (seong), 영 (yeong), and 진 (jin). Both boys and girls have names that use these characters.

These lists are by no means exact or even close to being exhaustive. Just as in English, you sometimes hear of men with female sounding names and vice versa. But using these basic rules of thumb, I have been able to be rather accurate in guessing a Korean's gender from their name alone. It also helps that Koreans are not always inventive with naming their children. I myself knew about five women named 김민정.

As there are multiple meanings for some of the characters in the above lists, I have not included meanings. However, knowing the meaning(s) of a character can be helpful. See for example my explanation on 용/룡 versus 미. Girls are not dragon-like, and men do not want to be known as beautiful.

Another slight trick I have noticed is that recently it has become somewhat vogue to name your daughter a pure/native Korean name. By this, I mean names that have no Chinese characters (hanja) associated with them. While theoretically possible for boys, this practice seems much more common for girls. Names such as 나리 (nari: lily), 소라 (sora: sea-shell), 아름 (arum: beauty), 이슬 (isul: dew), and 하늘 (hanul: sky or heaven) are noticeable examples.

To use this trick of course, you would need to be able to recognize native Korean words versus Sino-Korean words, which is certainly not a task for beginners. To make it even tougher, a few girls have mixed names, such as 은별 (eun-byeol: eun [the Chinese part] usually is "silver" or "mercy/kindness" while byeol [the Korean part] is "star").

As to my understanding, the government of South Korea places limits on what characters (think 한자 [hanja]) can be used in names. The list is quite large, but nevertheless does place some limits on what characters you need to become familiar with. Furthermore, since these characters can form actual everyday words, some combinations are unused in practice. While the name 철도 uses valid and approved characters, it is not a name most people would be prone to use (since it means "railroad," which would be a rather odd name).

In closing, I should also add that there are a number of Korean names that are legitimately unisex. Think Taylor or Jessie/Jesse in English (at least in the US). Some examples are 자경 (ja-kyeong) and 영진 (yeong-jin). I am aware of both men and women having these names.

In general there's no rule. Moreover, there are several names used by both genders.

Here is a list of typical female names per birth year:

Here's the top 25 Hanja used in female names from erumy.com. Left two columns list the Hanja for the first syllable in the order of frequency, and second for the second syllable of the name. 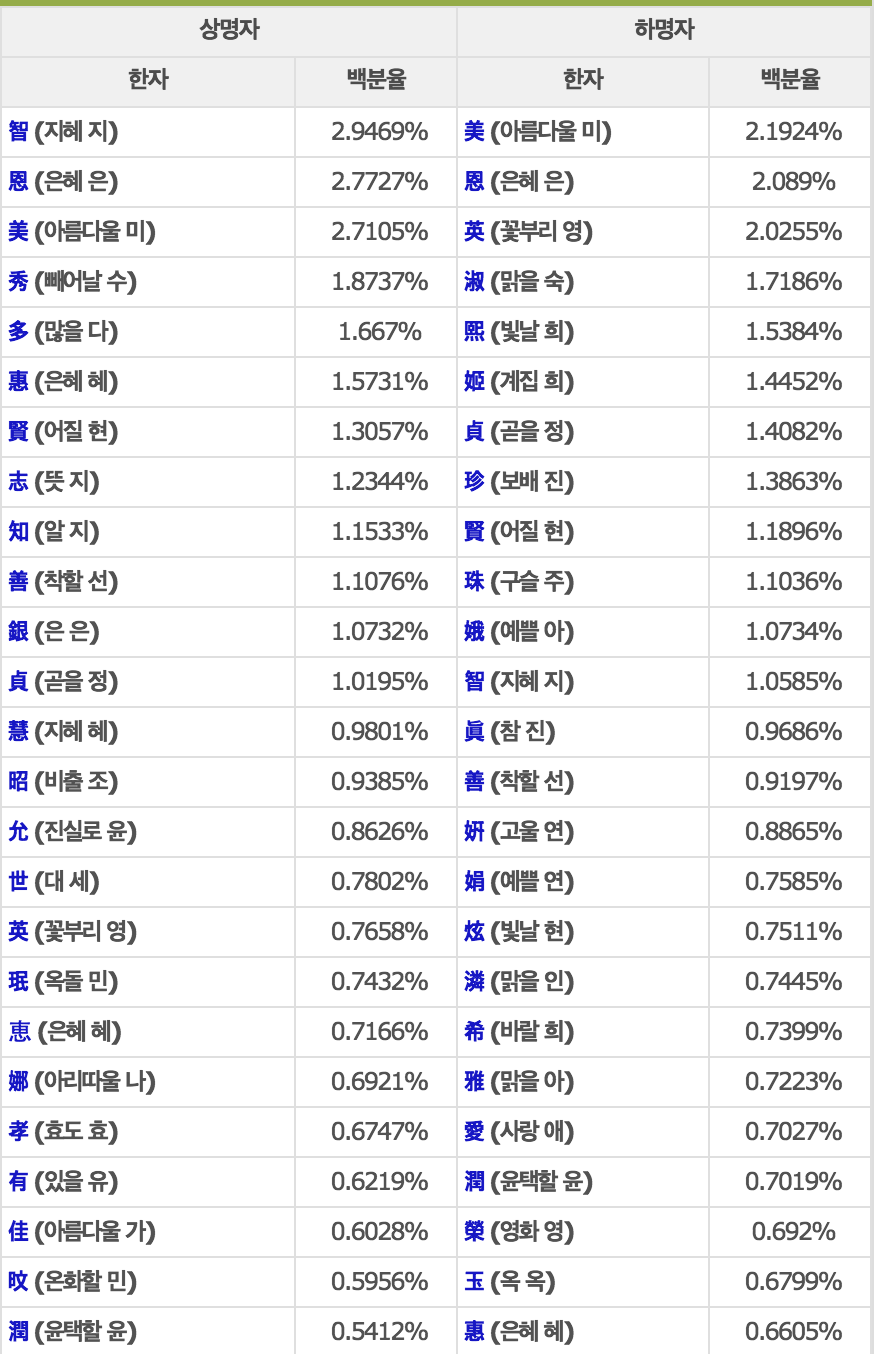 Male names on the other hand tend to have Hanja for grandness (e.g., 龍 용 dragon), but there are more variety and less pattern. Same table for male Hanja. 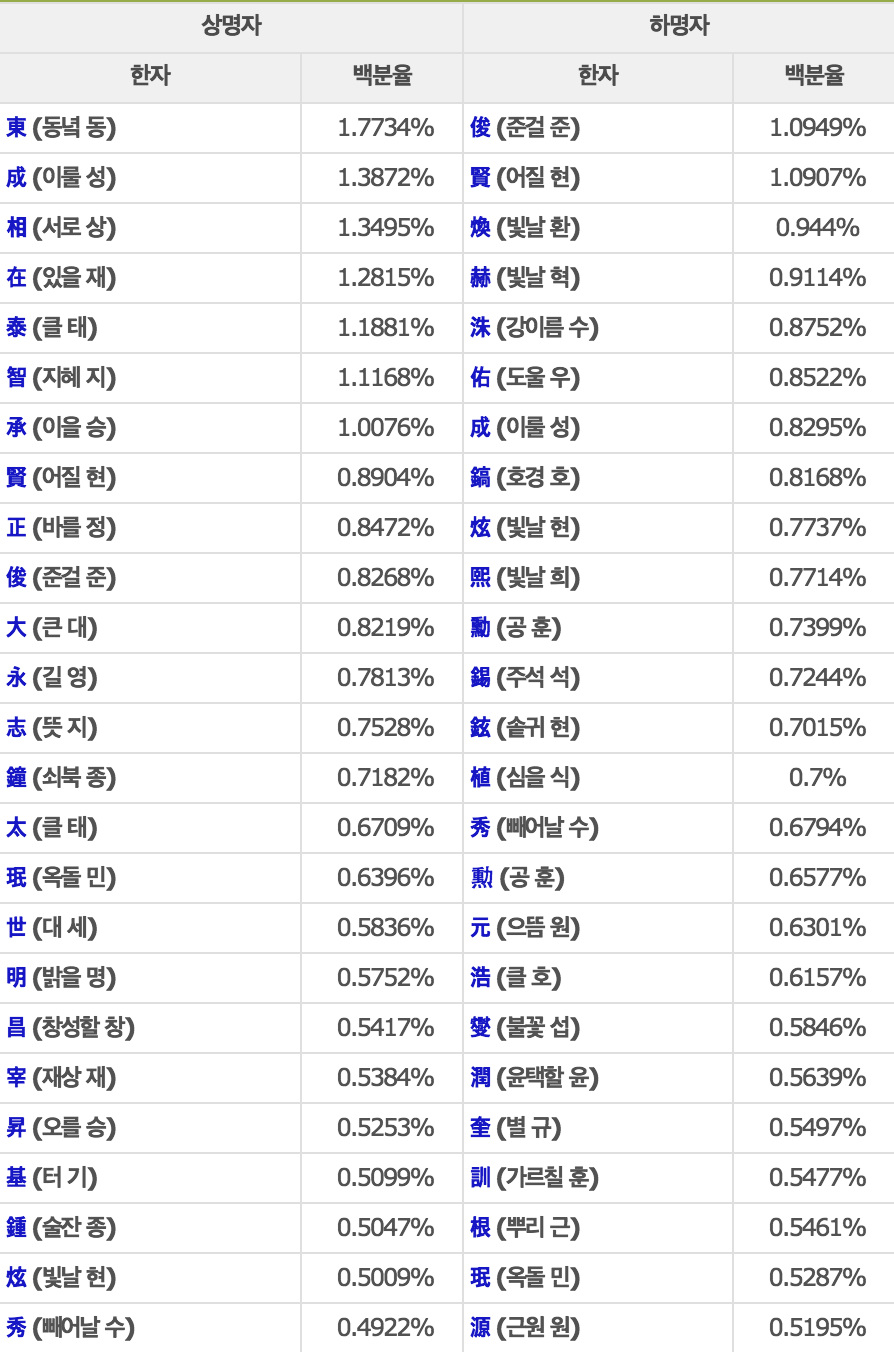 For practical purposes, it would be useful to memorize the most typical female names, and go from there.