I'm sure everyone will agree that they sound similar enough to their own counterparts to be interchangeable. If there are no tangible rules that separate their usage, what are some tips to spot their proper usage situations? Also, why does such distinction exist in the first place?

In the modern Seoul dialect, these are audibly "indistinguishable." I put that in quotations, since there is controversy over this. But, I believe that some dialects still distinguish them in an actually meaningful way. Not being an expert on southern 사투리, I cannot authoritatively comment on this, however it is my understanding that certain dialects certainly have distinct sounds for these pairs. This is evidence of there actually being a difference at one point, hence the distinction existing in the "first place." (Languages evolve of course).

Consider English for a moment. Do we really need the letter C? Every sound C makes can be replaced with a K or an S. Or take Q as another example. The mesh 'kw' provides a very nice replacement for Q. But we retain its use in English.

It could be argued that it is the same sort of thing for ㅐ, ㅒ as opposed to ㅔ,ㅖ. These letters are retained because they are still used. It is sort of circular logic to say that, but keep in mind that most languages are not changed for the sake of simplicity of spelling rules.

Furthermore, I met many Koreans that could not hear the difference between the words "play" and "pray." Words like "clown" and "crown" also sometimes gave them issues. But native speakers of English do not usually have these issues of auditory distinction. Even if non-natives cannot distinguish the sounds, native English speakers can tell the difference. Hence the reason we actually retain the use of R and L in English.

Based on everything I know about hanja and Korean linguistics, no Sino-Korean (Chinese character based) word uses the letter ㅒ.

I believe that technically, 애 is pronounce with the mouth and throat more open (or "spread out" ["입을 벌리는 정도가 더 큽니다"], as dotVezz's link in the comments suggests). I have seen some people transcribe 애 as /ɛ/ as in "Larry" or "fairy" and 에 as /e/ as in "pest" or "men."

Not being a pure linguist, I am not going to try to delve into every little detail of the IPA transcription of the "true" pronunciation of these letters. Whether they want to admit it officially or not, Koreans under age 60 (especially those in Seoul) say 애 and 에 (and sometimes 예) pretty much identically. It is the whole "marry-merry-Mary" issue. English linguistics professors may say these differently, but we normal folk all say them pretty much identically.

As a native Korean speaker, I use them based on my knowledge of grammar or rules or whatever you want to call it, rather than their sound.

It's because I totally agree that they are ALMOST completely indistinguishable by sound. For me, this can be compared to knowing the following difference:

I WRITE my journal everyday.

Similarly, you would know when to use ㅔ/ㅖ or ㅐ/ㅒ because they have different places to be. It's more of a SPELLING or GRAMMAR issue rather than something that can be distinguished by their "supposed" sound differences.

For your question about why there is such a thing, I would say that languages are never perfect.

This would be like the question I used to have when I was learning English. I never understood why English would care so much about Singular or Plural nouns while the rules are so vague to be even called a rule, let alone vowel pronunciation. (If you disagree, I suggest you check out these words: fish, food, sheep, deer etc.)

However, there is a difference in theory.

We call the smallest unit of sound 음운(phoneme).

(To be accurate, 본절 음운 can be divided into those two. Not going to go into details. The sentence above is still correct)

Then again 모음 can be divided into 단모음 and 이중 모음

단모음 is a vowel(모음) that doesn't change the position of your tongue or mouth while pronouncing it.

On the other hand, 이중 모음 is a vowel(모음) that changes the position of your tongue or mouth while pronouncing it.

Here is a table of 단모음

Now this is a map of 모음. 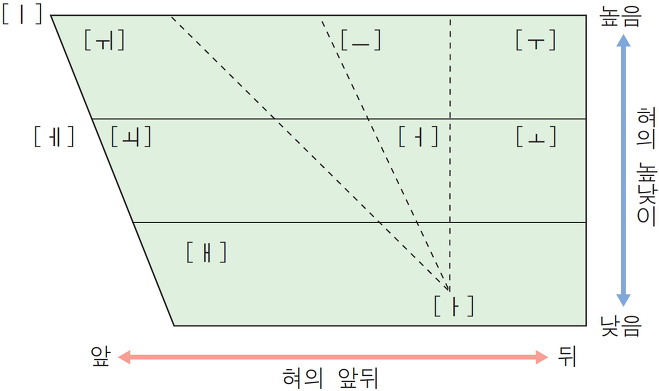 the quadrilateral shows where (or how) the tongue is when saying those vowels.

For example, ㅜ is said with your highest position of your tongue in the back and your tongue will be high with your mouth only slightly open. (also using the table above, you can find out that the shape of your mouth is round because ㅜ is 원순 모음)

Not the answer you're looking for? Browse other questions tagged pronunciation or ask your own question.

9
Which Korean words or sounds have been used as a shibboleth?

12
Are there rules that govern how certain characters are pronounced and when?
10
When is ㄹ pronounced as L and when as R?
13
Correct pronunciation when a syllable ends with two consonants
9
When are ㅅ and ㅆ pronounced as stops?
6
When to use single (ㅅ) or double (ㅆ) consonants?
3
In which cases does pronunciation change when a character ending in a consonant is followed by a character starting with a vowel?
2
When used as particles, do 의 and 에 sound the same?
3
Silencing 는 of 만나는 in rap to 만난? When is it okay to silence parts of a word without changing meaning?
1
When to pronounce as [dz] and [dʑ] in Korean ㅈ (IPA)?
3
Pronunciation of 받침 when speaking slowly