What is a good digital Korean-English dictionary?

Printed Korean dictionaries are often a bit out-dated in their language and impractical to take with you.

Do you know any good dictionaries for Korean-English / English-Korean? May be either online or apps.

I suggest Naver. It aggregates at least four other dictionaries: Oxford, Dong-A, YBM, and Kyohak.

For phones, if you're serious, you can make a shortcut icon (a bookmark that looks and opens like an app on your home screen) for one-touch access to the dictionary.

Easy instructions for iOS, and Android.

The only problem with this is that you can't use it offline.

If you use a Mac, there is a very good digital dictionary included in form of the "Dictionary" app. Korean is just not activated by default.

You easily find "Dictionary" in your Applications folder or using Spotlight. To use the Korean dictionary you need to activate it in the app's preferences: 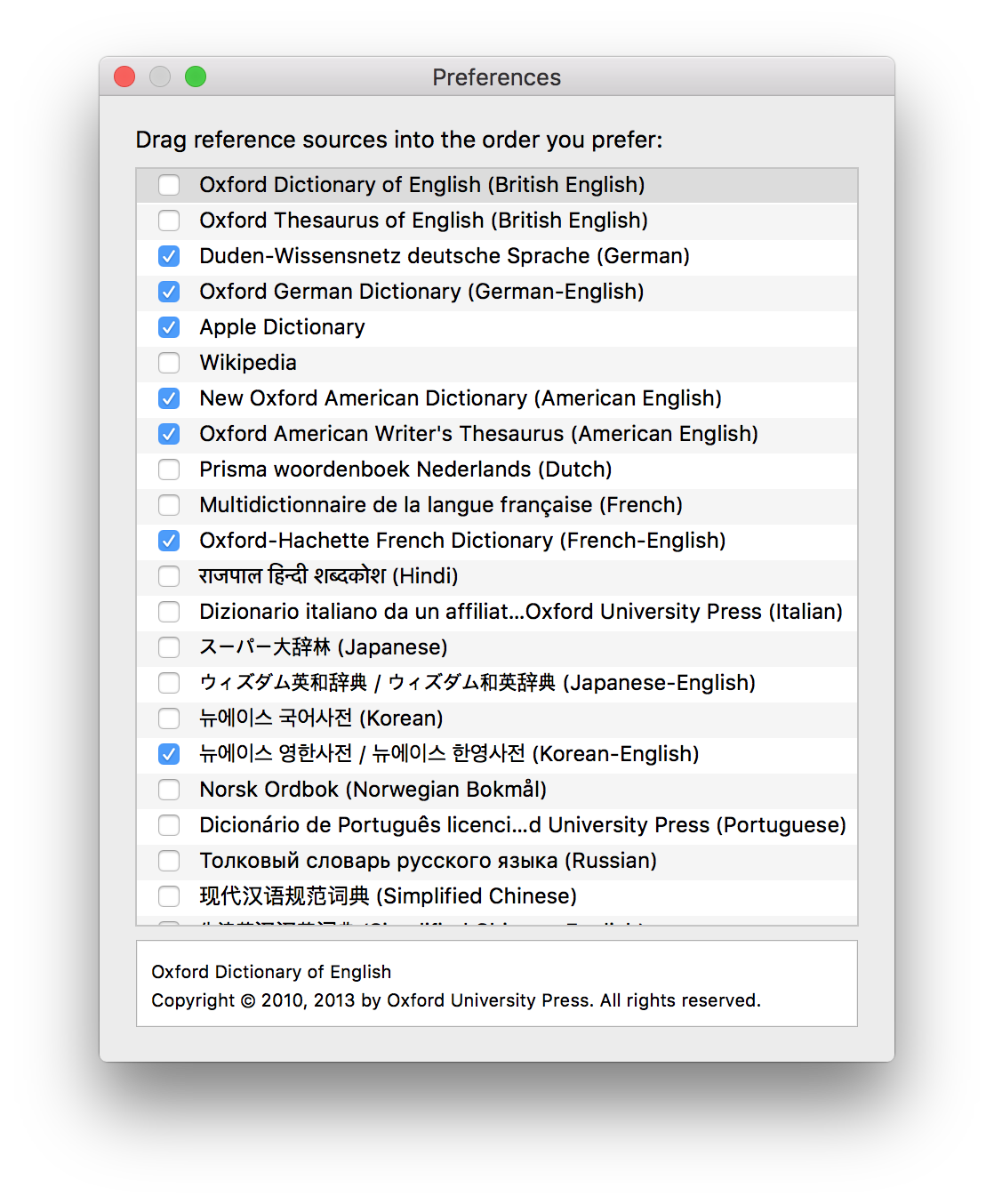 As you can see the app includes a Korean-English and a Korean-Korean dictionary plus dictionaries for all major languages. 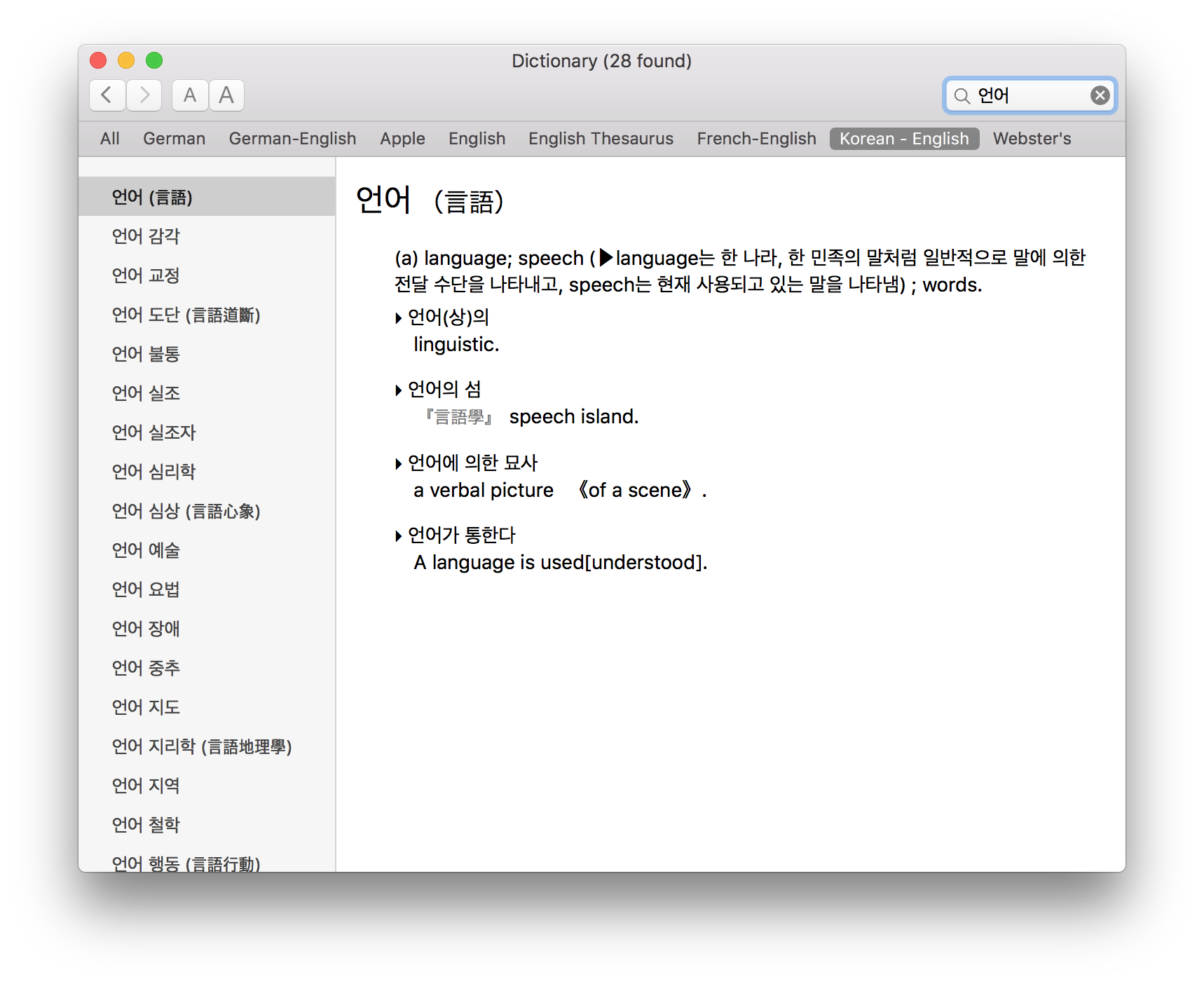 I agree that Naver is one of the most broadly used dictionaries on the internet. But you can consider using Daum Korean dictionary which has more concise explanation and examples.

The link shows all the Korean dictionaries available on Google.

If you are an advanced learner in Korean, you can consider using 국립국어원 표준국어대사전 published by National Institute of Korean Language.

The National Institute of the Korean Language somewhat recently launched the Basic Korean Dictionary, which is a web-dictionary for learning Korean that has been compiled in Korean for Korean learners and teachers and translated it into 10 languages, including the Korean-English Learners' Dictionary.

The Basic Korean Dictionary also supports exporting word lists (perhaps the Korean-English one will too in the future), which can be very helpful for making flashcards, etc. If it helps someone else, I made a little utility to help with this. Here is an example of creating Anki flashcards from this dictionary.

Some things it's lacking:

It's still new, and they've been actively working on collecting feedback and adding features, so hopefully these will be addressed in the future.

If you're looking for an offline, iOS dictionary, the YBM 올인올 영한영 플러스 사전 - English Korean English DIC By DaolSoft, Co., Ltd. is really wonderful. It has great definitions, extensive examples, word books, is fast, and doesn't require Internet access. Probably not as good as Naver and other online dictionaries, but the speed and offline access are great on the go.

Side note: This dictionary has a hidden feature that let's you link to words from webpages outside the dictionary. This is handy for making dictionary links from flashcards and such. Just format an HTML link as, YBMEKEDicAllinAll://search?word=$WORD, where $WORD is the word you're searching for, and it'll pop open the dictionary and search for the word.

I recommend LINGOES for j-k or j-e if you want a FAST OFF-LINE dictionary. It also has a pop-up functionality which is limited since Korean is conjugated to high heavens. But when the stars align and it works, it's very convenient. for the naver j-k dictionary it has example sentences too so it's very helpful.

Despite the price ($13.99) and hefty space requirements (1.1 GB!), Dong-A's Prime Korean-English dictionary is the one to go for.

They've been making paper-based dictionaries for a very long time and is the defacto choice for many students of both Korean/English language (You can see this mentioned in the product reviews).

If you're using the dictionary on the go and frequently a lot, then you want an App based solution, not a web-based one.

I've been using this app since 2011 and it's the longest-running app on my phone. It's had its ups & downs over the years but I wouldn't hesitate recommending this over other solutions. It's paid for itself many many times when I needed a translation quick from Korean->English or vice versa.

Another source is zKorean.com, which is both Korean–English and English–Korean. It is not as thorough as for example Naver, but it provides several good examples of phrases for each entry, and if you pay for the service, you get access to some extra features, such as Romanisation (though you can get that for free at via Al Lab and Narainfotech’s Korean Romanizer) and study tools. It also provides a basic introduction to the alphabet, basic grammar and Korea. The page works excellently on phone as well, which I would assume is especially well appreciated when on the move.

Not the answer you're looking for? Browse other questions tagged resources or ask your own question.

6
Korean dictionary (online or offline) showing the pronunciation
4
How do you tell if a verb is irregular? What are the best dictionaries for things like this?
3
What does 남달라 mean in EXO's Tempo?
3
How do say and spell "Epiphany" in Korean
0
What's the meanings of 다구리, 뭉쳐, 스릉 and so on?
1
what does 헌납당했고 mean? I came across it in a novel

8
What are the best sources to study for TOPIK?
6
Besides endic.naver.com, any other good Korean-to-English dictionary site for (hangul) super-newbie learners?
7
Does howtostudykorean.com really do what it says?
2
Ideas for interesting Twitter feeds and similar resources to follow for learning Korean?
8
What is a good online resource or app (Android,PC) to start learning Korean from the very beginning?
6
Reference request: Chinese root of Korean
5
Do Korean share more vocabulary with Chinese or Japanese?
2
Does a unified North & South Korean dictionary really not exist?
0
What Korean reader software aimed at learning pronunciation is available?
0
Are there any resources for learning korean specifically for people specializing in programming and 3D design?