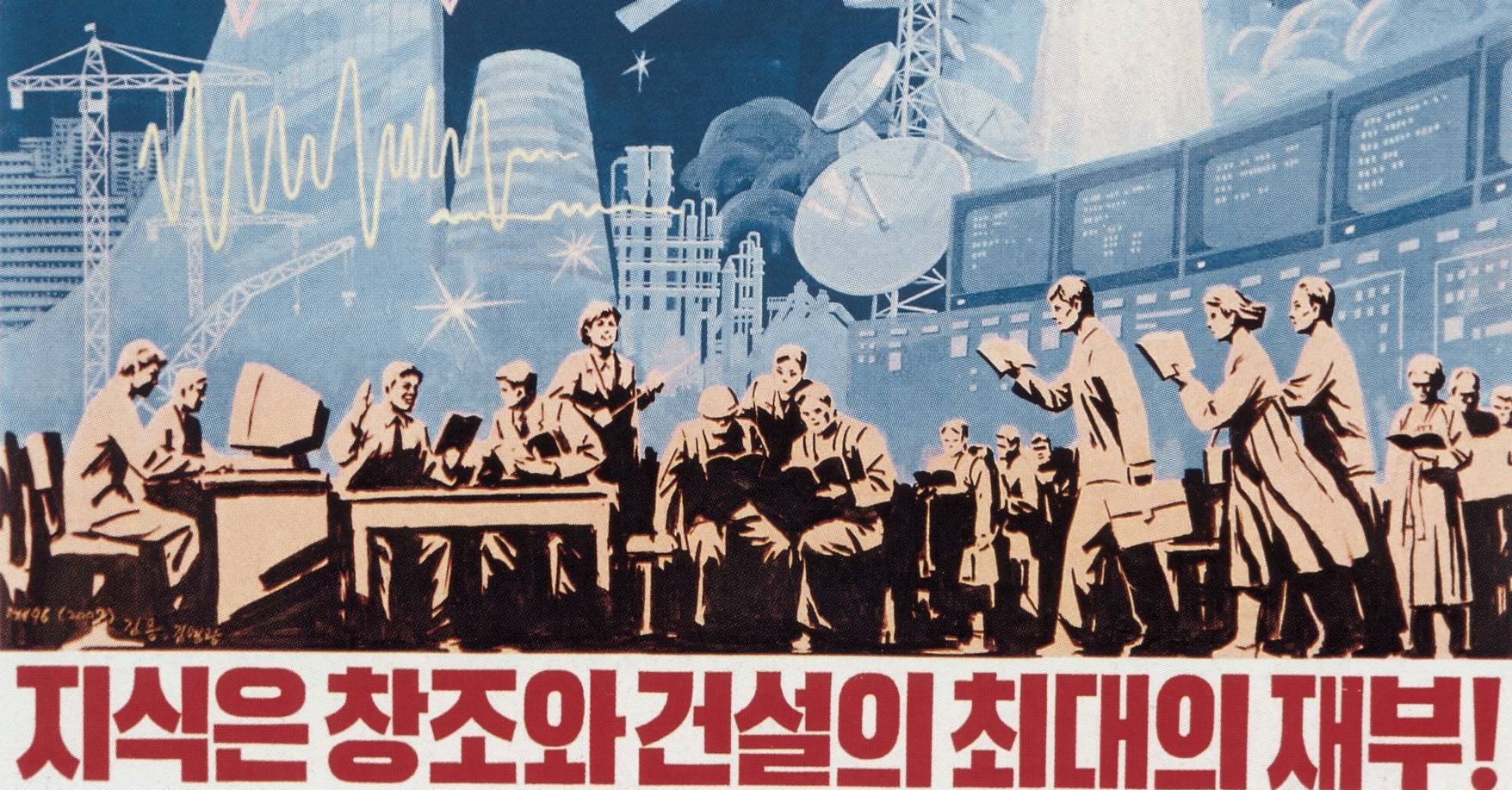 I am struggling to parse this sentence.

It looks to me a bit like "Knowledge is a property of the best of creation and building", but I'm not confident that's a sensible translation.

Even 최대의 재부 on its own doesn't quite make sense to me. I believe the more common South Korean would be "최대의 재산". With the placement of 의, it seems like 'property of the best', or 'asset of the maximum', but I'm sure those aren't good idiomatic translations.

Adding to @gaeguri's answer, the word '창조' seems to have a different meaning in North Korean as the linked Naver North Korean dictionary indicates:

Its Chinese characters are '創祖' and you should note that '祖' here means (1) grandfather, (2) ancestor and (3) beginning or start, etc. '祖' is different from '造' which is used in South Korean meaning to build or create.

Therefore, the phrase could be translated to

Knowledge is the greatest asset for inventor (creator) of communist theory and building of communist society.

Even if '창조' has the same meaning as South Korean, i.e., 'creation', it could be translated to

Knowledge is the greatest asset for creation and building of communist society.

Their catchphrase or slogans are generally politically motivated and they are almost always about praising their leaders and ideology. It seems obvious what they want to create and build.

A side note: As you mentioned, the phrase is related with the North Korean political ideology, i.e., 주체사상 (Juche Idea or Self-reliance Idea). As a non-expert of North Korean, the above is the best I could possibly translate.

First of all, according to this post on Naver knowledge search, 재부 is, as you guessed, a North Korean version of "재산". So it can mean property, assets, riches, etc.

Not the answer you're looking for? Browse other questions tagged translation north-korean phrase-meaning or ask your own question.

5
Is hanja opposed in North Korea?
11
Why is "려권" North Korean for "passport?"
4
Native English Translations that capture the intended emotion of "그래야 비로소"
5
How helpful is knowing Russian vocabulary for knowing vocabulary which only occurs in North Korean?
2
Translation of North Korean posters
3
What do the characters I've found on this old gun mean?
3
Please translate some North related words
0
Why does the North Korean guide in this video not seem to understand written Korean letters?
2
Historical Text: how to translate domesticated animals 謂牛馬雞犬
1
Could you correct this translation from English To Korean?