Is hanja opposed in North Korea?

I've heard here and there that hanja was opposed in North Korea for some ideological reason or another, but the English language Wikipedia article on hanja seems to present a more nuanced situation, for example mentioning Kim Il-sung's position on the issue, and that students are expected to learn a few thousand hanja.

This seems true in North Korean media, though I can't say what's taught in their schools. As I understand, 한자 (Hanja) was no longer in use in 북한 (DPRK, aka North Korea) by the end of the Korean War, and upheld this way as the regime wants to maintain a monolithic culture among its people.

To substantiate this somewhat, it is even strongly frowned upon (if not outright forbidden) to call their language 한국어 (Korean, in South Korea), the word 조선말 (Chosun-mal) being the correct term, derived from the historic kingdom of Korea, Chosun. (This is not due to animosity against South Korea, but on the contrary, because North Koreans believe that all Koreans are one people and destined to reunify, as was the case during the five centuries of the Chosun kingdom.) There is a strong sense of national pride in their language when there.

From an interview with a North Korean on nknews.org published in Dec '16, which is behind a paywall so according to someone on Quora:

Yes, we learn Chinese characters (referred to as Hanja) in North Korea from elementary school to the senior year of high school in the North. North Korean society changes rapidly, and there could have been some changes to the education system since I left)

I have no reason to suspect either of lying or distorting on this subject. But also, 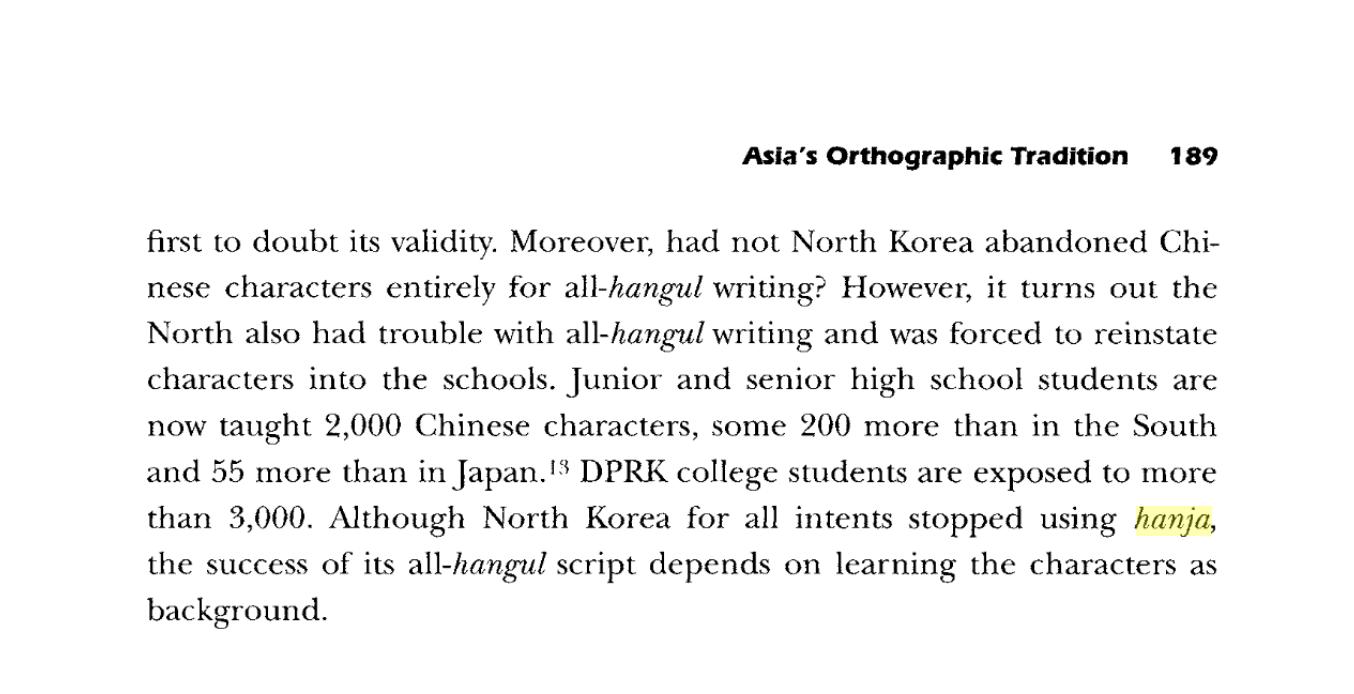 from Hannas, W. C. (2003). The writing on the wall: How Asian orthography curbs creativity.

Not the answer you're looking for? Browse other questions tagged hanja north-korean or ask your own question.

16
When should I use Hanja instead of Hangul?
10
Are ordinary native Korean speakers capable of understanding individual Japanese kanji words in written form?
6
Dropping of initial ㄹ and ㄴ before /j/ and /i/ in hanja
11
Why is "려권" North Korean for "passport?"
4
Translation of North Korean poster :"지식은 창조와 건설의 최대의 재부!"
5
Why are Hanja described with -ㄹ/을?
0
Is the use of Hanja in Korean associated with Traditional (rather than simplified) Chinese characters?
3
Please translate some North related words
3
Does 단비 (sweet rain) have Hanja?
2
Why do some hanja characters have multiple hangul?